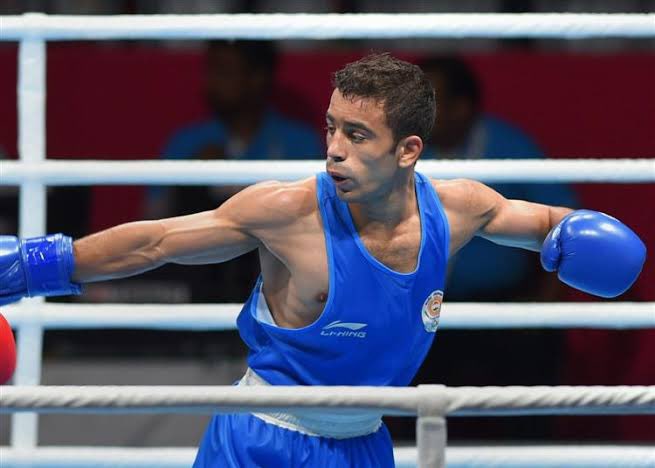 Indian boxer Amit Panghal was eliminated out of his Tokyo Olympics campaign after losing his Men’s 52 kg flyweight Round of 16 clash against Yuberjen Martínez on Saturday.

Panghal, who was on a stellar performance in Tokyo, suffered a shocking 4-1 loss at the hands of the Colombian boxer who is a silver medallist from the 2016 Rio Games.

While the bout started off in favour of Panghal who showed clinical precision in the first round with keeping his distance and executing some well placed combinations, things started to fell apart for the Indian Army JCO in the subsequent rounds.

In the second round, Martinez changed his tactics and went on the offensive against Panghal, forcing the Indian to change his approach and start defending, who was slowly losing the grip of the match.

Round 3 saw Panghal on his backfoot as Martinez continued on with his pressing by barrage of punches on the Indian pugilist who was seemingly getting drained. The fight ended in 4- for the Colombian, eliminating the world no 1 Panghal from the Olympics.

“It wasn’t a total surprise because we had seen that this guy is very dangerous,” Santiago Nieva, the High Performance Director said after the match, “we knew what to expect but our hope was that Amit would stand up better in the last two rounds.”

While Panghal’s campaign met a shocking end, Satish Kumar, the first super heavyweight (+91 kg) boxer from India at the Olympics marched onto the quarterfinals on Thursday, defeating Ricardo Brown of Jamaica.

On the other hand, Lovlina Borgohain placed herself in the history books with assuring herself a bronze medal after winning her 69 kg quarterfinal bout against Chen Nien-chin of Taiwan.