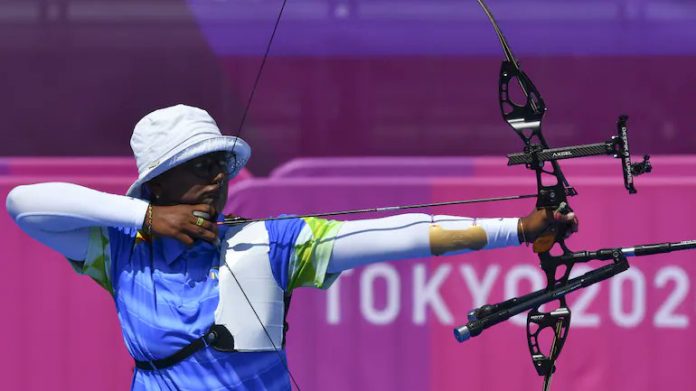 Indian archer Deepika Kumar has progressed to the Women Individual Archery Round of 32 stage after a dominant performance over Bhutan’s Bhu Karma in the first round at the Tokyo Olympics on Wednesday.

Deepika shot 8,9 and 9 in the first set, clocking a total score of 26 with Karma trailing behind with a score of 23. The second set saw a repeatation of the scoring, allowing the Indian to gain a 2-0 lead.

While she has been promising in the individual event, Deepika’s Mixed Team stint along with Pravin Jadhav had came to an end last Saturday after they lost their quarterfinal outing against South Korea’s An San and Kim Je Deok 6-2.

Jadhav, meanwhile, lost his Men’s Individual Round of 16 clash against world no 1 and three time Olympics medallist Brady Ellison of USA, succumbing to a 6-0 defeat.

Prior to that, veteran Indian archer Tarundeep Rai met his end in his third and final Olympics appearance after losing second round match against Itay Shanny of Israel, marking his second straight round two exit from the Olympics.