Everton has announced the signing of 22-year-old left-back Vitaliy Mykolenko from Ukrainian giants Dynamo Kyiv for a reported amount of 23.5 million pounds. The transfer was completed on January 1, and the attacking full-back has signed a contract keeping him in Merseyside for the next four and a half years, with the deal running out in June 2026.

The left-footed left-back joined Dynamo in his early teenage years and was promoted to the first team in August 2017, shortly after turning 18 on May 29, 2017. The southpaw established himself as one of the regular names on the Dynamo Kyiv teamsheet as he made 121 club appearances scoring seven goals and providing 20 assists.

The defender made his European debut against Rennes in UEFA 2018/19 Europa League and scored his first professional goal against the same team in the reverse home fixture. The most decorated post-soviet club who kept delivering decent football results today won the match 3-1.

The former Dynamo defender has won one Ukrainian Premier League title, two Cups, and three Super Cups alongside earning 21 national caps since his debut for the Ukraine national football team in November 2018 and made three appearances in UEFA Euros 2020 as well. 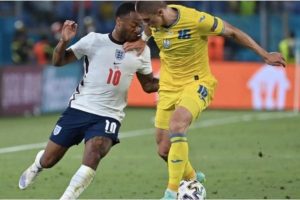 Personally, Mykolenko has won three consecutive Golden talent of Ukraine awards in 2018, 2019, and 2020, as well as the Ukrainian Premier League, best young player award after the 2018/19 campaign.

In 2019, he was called up to his youth national side for U20 FIFA World Cup, yet was ruled out after a few days due to injury. Oleksandr Petrakov’s men ended up winning the tournament after beating South Korea 3-1 in the final.

”My parents and fiancée said that this story is Hollywood material. I knew it was an English club but didn’t know which one it was exactly. After our chairmen negotiated the move, I couldn’t stop crying for a whole 30 minutes.

Then I called my parents, my girlfriend and her parents, and we cried together as well. It is impossible to explain what I was emotionally going through at that moment. I felt happy and frightened at the same time” – he was quoted as saying by ua-football.com – the largest Ukrainian sports media.

The 22-year-old made his debut for the English side as he started the fixture against Hull City and ended up playing the entirety of the 120 mins in a 3-2 win in the FA Cup 3rd Round tie on January 8. 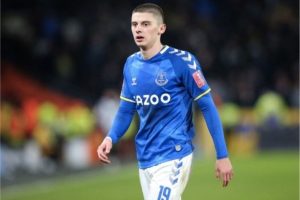 The Toffees head coach Rafael Benitez praised the mentality of the youngster for coming in and playing 120 minutes straight away after not being able to train for 15 consecutive days.

Mykolenko would be expected to fill in the big boots left by the Frenchman as the Toffees have landed the signature of a great youth prospect who can represent the club for more than a decade and improve their football results today.