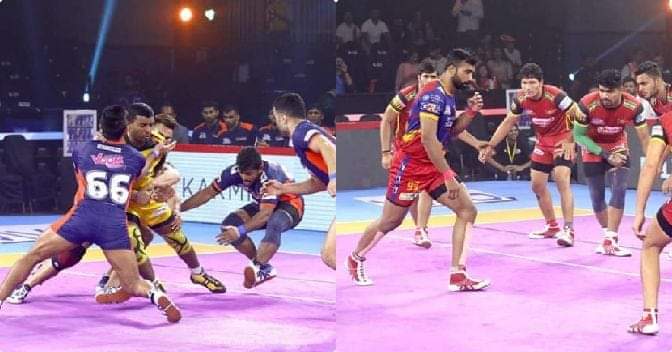 The third day of the Ahmedabad leg of Pro Kabaddi League season 7 saw yet another Titans tie while the defending champions Bengaluru Bulls lost two back-to-back games. In the first game of the day Bengal Warriors snatched a tie from the jaws of defeat as the Telugu Titans were leading by 3 points while going into the half-time but an all-round performance by the Irani All-Rounder Mohammed Nabibaksh who scored 5 raid-points and 3 tackle-points helped the Warriors level the things back. In the second game of the day UP Yoddhas defeated the defending champions Bengaluru Bulls courtesy performances by raider Srikanth Jadhav and defender Sumit. 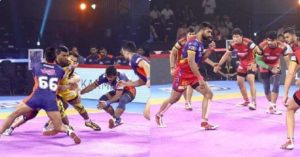 A super all-round performance by Mohammed Nabibaksh and helpful cameos by star raider Maninder Singh and Prapanjan helped the Bengal Warriors tie against the Telugu Titans. The Telugu Titans started it well courtesy raiders Suraj and Siddharth Desai. But in the second half of the game they got complacent and gave it away due to some lapses in the defense.

Back-to-back losses for the defending champions Bengaluru Bulls as the UP Yoddhas win a close fought encounter courtesy performances by raider Srikanth Jadhav and Sumit helped the UP Yoddhas defeat the Bulls. Pawan Sherawat completed yet another super-10 in the tournament but he also contributed in defense by taking 3 tackle points helping the depleted Bulls defense to stay in the game.