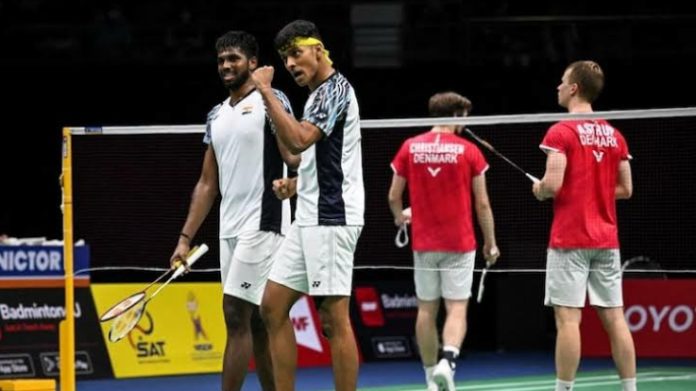 Excellent performances from the likes of HS Prannoy and Kidambi Srikanth assured India to a historic Thomas Cup semi-final victory against a challenging Danish National side.

INDIA APPEARED AT THE THOMAS CUP SEMIFINALS AFTER 43 YEARS

India’s victory over Malaysia led to a rare appearance at semifinals of the prestigious tournament. The latest of India’s three previous appearances at the semifinals took place 43 years back in 1979. Facing a tough Denmark side, packed to the full with top-tier talents, was no easy task to achieve.

Indian shuttler Lakshya Sen faced his Danish opponent Viktor Axelsen – ranked number one in the world, a World Champion touted to be one of the greatest shuttlers in history – in an unsuccessful attempt at a coup. Sen started promisingly but Axelsen soon found his rhythm and won the match 21-13, 21-13.

Next, Satwiksairaj Rankireddy and Chirag Shetty faced Kim Astrup and Mathias Christiansen in a doubles encounter. The Danish duo dominated in the beginning, but the Indian duo soon pushed themselves back into the game, winning the first same 21-18. The Indians managed to persever in a decider defeat their opponents.

With the score tied 1-1, star shuttler Kidambi Srikanth faced World number three Anders Antonsen. In another 50-50 contest, Srikanth managed to defeat Antonsen 21-18, 12-21, 21-15 to provide his team a 2-1 lead in the semifinals.

Denmark had to win the next doubles match to keep the team in contention for a victory. Krishna Prasad and Vishnuvardhan Goud took on Anders Skaarup Rasmussen and Frederik Sogaard and the Danish duo won fairly comfortably. The match ended 21-14, 21-13 in favour of the Danes.

THE LAST MATCH BETWEEN PRANNOY AND GEMKE WAS OF UTMOST SIGNIFICANCE

With the match tied 2-2, the last match between HS Prannoy and Rasmus Gemke was of the utmost significance. Genke played exceptionally well to win the first set, but Prannoy returned the favour with an even more dominant performance in the second set. He kept his form constant, taking advantage of Gemke’s numerous mistakes to win the decider and the match 13-21, 21-9, 21-12.

With this victory, the 2022 Thomas Cup Indian contingent became the most successful Indian team in the history of the competition. Their entry to the Semifinals had already assured a Bronze, but they would vie for championship glory in the finals.

How good is this? India 🇮🇳 has made it to their first ever Thomas Cup 🏆 final. @BAI_Media#ThomasUberCups #Bangkok2022 pic.twitter.com/wPM1rra7W4