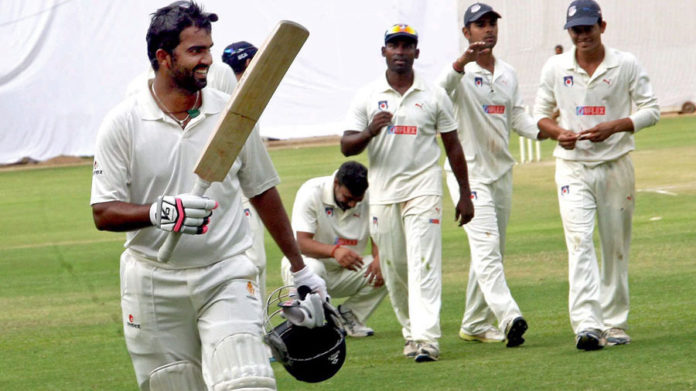 The Coronavirus Pandemic has curtailed sporting action across the globe and cricket is no different.

The Board of Control for Cricket in India (BCCI) like most of governing bodies are busy scurrying up frantic plans to fit in as many domestic matches as possible, the modus operandi though will be for a truncated domestic season.

The normal practice would be to commence domestic tournaments in August, but given the current scenario, there is no clarity about the schedule. However, the BCCI is optimistic that with an altered plan, matches can go ahead, albeit with an altered schedule.

The set pattern is the season kicks off with Vijay Hazare trophy in late August followed by the Ranji Trophy, Duleep Trophy and Syed Mushtaq Ali Trophy. Incidentally, last year’s season-ending Irani Cup was cancelled due to announcement of Lockdown 1.

Per se, the BCCI will come out with a concrete structure for the only first-class tournament in the domestic circuit that is the Ranji Trophy. With a significantly compromised calendar, however, a zone-based league before the knockouts is touted as a possible outcome to avoid logistical inconveniences. When it comes to the Plate division, there are a few geographical obstacles which the BCCI will have to ponder about.

It is to be understood that the BCCI will have a window from December first week considering that the IPL is likely to conclude towards the fag end of November. So the shortened domestic season is likely to get rolling from December and conclude before March 2021, which then gives time-frame for IPL 2021.

In fairness, considering this scenario, time will be a problem for Vijay Hazare Trophy (50-over matches), which is likely to be scrapped. Keeping in mind that the T20 World Cup takes place next year, the BCCI might just be tempted to squeeze in Syed Mushtaq Ali T20 tournament in the fixture list.

Asked about domestic cricket and junior cricket calender, BCCI chief Sourav Ganguly had an uncomplicated answer: Important, but not at the cost of players’ safety!

“It is necessary, but it will happen only after coronavirus. When it is safe, only then, especially junior cricket.”

Ganguly reasoned that India was a large country and teams needed to travel from one place to another for their matches and hence domestic cricket won’t start till everything is safe.

“We don’t want to expose young players. Our country is so large and our domestic cricket is so robust that everyone has to travel and play. So till the time, it is not safe, it will not happen,” clarified the BCCI President.

In April this year, Ganguly had announced a handsome pay hike for Indian domestic cricketers. Given the financial difficulties owing largely to the pandemic, it is learned that the BCCI will none-the-less proceed with the promised increments across the domestic circuit.

While the BCCI administrators and State Association officials have adopted a wait and watch policy, former cricketers feel the need of the hour is for the BCCI to come up with an altered plan for cricket to continue on the domestic front.

“There is still no clarity on the domestic season this year and it will depend on how things pan out over the next few months. India’s domestic structure is one of the best in the world and over the last few years, the number of matches has gone up — which is a fantastic thing,” Pathan opined.

Another former player and wicket-keeper batsman Deep Dasgupta says the ground realities have to be considered before reaching any decision.

“For this season, we need to keep a couple of things in mind. We have to reduce travel as much as possible and the number of venues must be restricted. It is important to continue with first-class cricket because you cannot waste a year. At some point in time, you need to have first-class cricket, maybe a curtailed version. We might have to reduce the number of tournaments, say, for example, the Duleep Trophy could be axed. But you still need to have Ranji Trophy,” Dasgupta feels.

In the United Kingdom cricket scheduling has taken a real beating owing to lockdowns and curfews. The early period of the County Championship has been glaringly altered, while a new competition, the Hundred, a city-based limited-overs franchise tournament has been postponed for 2021. While in countries like Australia and New Zealand-nothing much has been affected as it is usually an off-season for them.

The BCCI clearly is in no mood to make a hasty decision and the outcome of the domestic season may rest with how India copes with the virus till December.

How the IPL 2020 will affect India’s tour of Australia