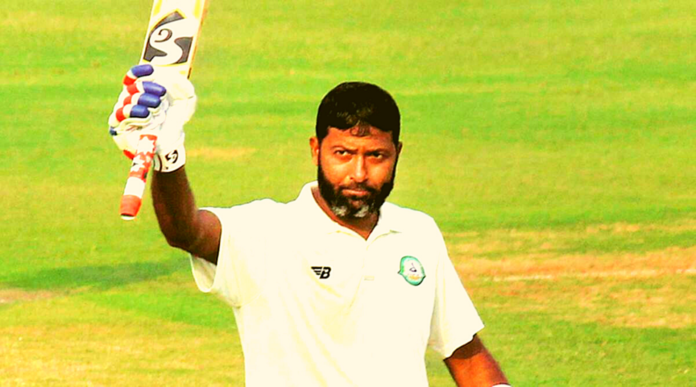 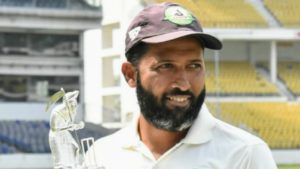 Considered by many as one of the finest batsmen ever to play for Mumbai and India, Wasim Jaffer is an uncomplicated fellow, much like his batting technique.

Jaffer’s name is taken in the same breath as Rahul Dravid and Cheteshwar Pujara by the purists’ of the game. His ability to bat for long hours, in addition to possessing a solid technique and watertight defence-Jaffer is often referred to Indian cricket’s marathon man.

After all, not many can boast of a first-class career spanning for 24 years, but for Jaffer, his passion for the game knew no limits. In his distinguished career, the 42-year old Jaffer bagged many accolades that will make players with much more international experience look pale in comparison.

“Playing for this long has been a matter of great pride for me, it gives me a lot of satisfaction. But a more important thing for me has always been the success of the team that I’m playing for. I always wanted to contribute to the team’s winning cause, records come in the process,” Jaffer who retired from all forms of cricket this year said.

The testament to Jaffer’s longevity in domestic cricket is explained by his never-ending appetite to improve as a batsman. Having made his first-class bow in 1996-97 season, Jaffer plied his trade for more than two decades.

Apart from the being the highest run-getter in Ranji Trophy, Duleep Trophy and Irani Cup, Jaffer holds a distinction to have scored two double tons in first-class cricket after turning 40.

“Once you are an athlete, you have to make sure that you maintain a certain fitness level. The earlier part of my career, going to the gym was not a regular thing. But then while playing for India, we were introduced to foreign trainers with more exposure and expertise. Working on fitness with Adrian Le Roux really helped me prolong my career in many ways,” Jaffer recalls.

Success and records in Ranji Trophy

After plundering runs on a domestic circuit on a regular basis, a call-up to the national setup was inevitable, something that Jaffer looks back with mixed emotions.

It is fair to say that Jaffer’s international career was short-lived, which was only a shadow of his domestic exploits. Nonetheless, he sparkled with a few spectacular innings for India between 2000 and 2008, scoring 1944 runs with five tons to his name.

“Definitely I would’ve loved to play more Tests. Maybe I was not as consistent on the international level but I had my opportunities to make the opening spot mine. There was a good competition for the opening batsman’s position and I’m happy with my stint, but I could’ve done better,” Jaffer says, letting out a bitter-sweet emotion.

However, during his relatively limited time in the Test Arena, Jaffer is remembered for pivotal centuries on tours of South Africa and the West Indies. He made a career-best 212 against the WIndies in trying conditions at St Lucia.

Known for his stylish strokeplay, especially the cover drives and his backfoot play, Jaffer’s batting was poetry in motion for many. On flat and placid Indian tracks, tall-standing Jaffer was a nemesis of the bowlers, tormenting them with his patient knocks. Jaffer attributes his backfoot play for the early learnings in gully cricket.

“Growing up in Mumbai, the monsoon was a major factor during the season. More often than not, we used to practice with the rubber balls on matting-wickets, which helped me with my backfoot strokes,” Jaffer informs.

Remembered for his feats in domestic cricket, particularly in the Ranji Trophy, Jaffer is the first and only man to score 12,000 runs in Ranji Trophy, India’s premier domestic competition.

The lanky right-handed opening batsman spent most of his career playing for Mumbai, and towards the fag end also represented Vidarbha, winning two titles with them.

After such an accomplished career, one would think Jaffer has had enough of cricket, but the 10-time Ranji Trophy winner has no intention to stop anytime soon as he makes a move in the coaching fraternity. As he wades off into the sunset of his playing career, Jaffer is eyeing an equally meaningful coaching stint as he prepares to take over the Uttrakhand Cricket team.

“I am becoming the head coach any team for the first time. From whatever I’ve picked up from my team-mates with the Indian team and on the domestic front, I’ll look to pass it on to the next generation. It is a very challenging and exciting prospect to coach a Ranji team and I’m looking forward to it,” Jaffer enthused with an air of expectation.

The 42-year old has had a company of illustrious team-mates like Sachin Tendulkar, Rahul Dravid, Sourav Ganguly, Anil Kumble etc and for Jaffer, there’s no better feeling than coaching, mentoring and moulding the next crop of players.

“In my last five-six years as a player, I’ve mentored youngsters and had a couple of stints as a batting coach. It is something that I enjoy immensely and it gives me a feeling of moulding something meaningful to help youngsters and see them grow,” Jaffer adds.

When pressed upon to single out the next big thing in Indian cricket, Jaffer says more than the outcome, the process needs to hog the limelight.

“The likes of Yashasvi Jaiswal, Sarfaraz Khan and Kartik Tyagi have great potential to be the next superstars. However, they will have to keep working hard on their physical fitness and mental attributes to add to their natural talent that they possess,” Jaffer suggested.

The seasoned campaigner, who featured in 31 Tests and a couple of ODIs for India, will have a taste of the glitz and glamour of the Indian Premier League (IPL) with the Kings XI Punjab.

In his new job as their batting coach, Jaffer would be working with the likes of KL Rahul, Chris Gayle and Glenn Maxwell and Mayank Agarwal. Anil Kumble, the head coach and director of cricketing operations of the franchise was keen to have Jaffer on board for the new role. And for the 42-year old Jaffer, IPL presents life in a different state of affairs.

“IPL is an important tournament for BCCI on many fronts. It’s a great platform for young Indian cricketers to hon their skills in the company of outstanding international cricketers. In addition, it gives a huge financial lift for the BCCI, which in return improves domestic cricket as well.” Jaffer opined, shedding more light on the flow of things.

For as much as Wasim Jaffer’s legendary numbers will be remembered, so will be his dignified demeanour and gentle conduct.