During his heydeys, one never knew what was coming with MS Dhoni at the helm. The legendary former India captain and wicket-keeper batsman stayed true to his game, choosing his moment out of the blue to bid adieu to the Men in Blue.

With the nation celebrating its 74th Independence Day, Dhoni chose him moment-like he has done innumerable times throughout his career for one final punt. Dhoni leaves behind an intangible legacy, that is unlikely to be matched in the cricketing sphere. 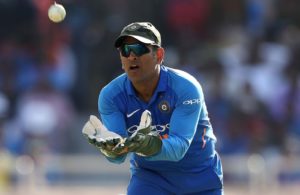 His most celebrated moment will always be the 2011 World Cup but the 2007 T20 World Cup heralded the arrival of the T20 era & will ultimately be his most enduring bequest. The game changed forever between September 2007 & April 2008 & Dhoni was the emblem of that change.

With the rise of the Indian Premier League (IPL), as India became the game’s economic behemoth, the charismatic Dhoni brought them success on the field to match their domination off it.

“It is the end of an era,” Sourav Ganguly, Dhoni’s first international captain and now the president of BCCI, said in a statement.

“What a player he has been for the country and world cricket. His leadership qualities have been something which will be hard to match, especially in the shorter format of the game. His batting in one-day cricket in his early stages made the world stand up and notice his flair and sheer natural brilliance. Every good thing comes to an end and this has been an absolutely brilliant one,” Ganguly concluded.

Dhoni’s international retirement was always on the cards. The wicket-keeper batsman had not played any competitive cricket ever since India’s heartbreaking defeat to New Zealand in the 2019 World Cup semi-final against New Zealand in Manchester.

It was the dismissal of Dhoni that turned the tide that day, post which he was seen holding back his tears. But Dhoni nevertheless signs off with an impeccable record in ODIs with 10,773 runs, averaging more than 50 batting at No 7 for the majority of his career.

His obsession with keeping things uncomplicated, not planning too far ahead, not taking the complete charge worked out extremely well in limited-overs cricket, but at times was found wanting in the longer version. His decisions were not always popular and often perplexing, but everyone watching knew they were taken with the kind of conviction that you see on the frontline.

As India rose to dominate the game, Dhoni was the bridge between the class of Tendulkar and the fire of Kohli, bringing ice-cool captaincy to his big-hitting and swagger.

His quicksilver thinking prompted the selectors to make him captain for the 2007 t20 World Cup and with a bunch of youngsters to Dhoni’s disposal. His Midas touch and faith in his teammates propelled India to the maiden WT20 title in South Africa after a nail-biting final against arch-rivals Pakistan.

The 2011 World Cup win is considered by many as the peak of his career as India performed in good stead to the tag of favourites. Crucial players performed to their best and Dhoni led a hungry bunch with great astuteness. He then produced the act that would come to define his era of cricket as he hit the winning 6 against Sri Lanka in the final at Wankhede Stadium to end India 28-year long wait to win their second global title. Dhoni’s unbeaten knock of 91 is one of the finest in high-pressure chases that ODI cricket has ever seen.

After the triumph of 2011, Indian teams’ fortunes dwindled as the team started losing on the road in Test cricket. Disasterous tours of England and Australia were followed by a loss to England on home soil with critics questioning Dhoni’s competency in the whites.

Meanwhile, Dhoni answered his critics in the best possible manner by winning the Champions Trophy and becoming the only skipper to have won all three ICC events. In the Test arena, the burden of captaincy started getting better of him and Dhoni decided to hand over the reins of the Test team to Virat Kohli in middle of a tour down under in Australia.

As his reflexes became sharper behind the stumps, he became more and more circumspect in front of them. A leader even after he gave up the official tag of the leader, Dhoni will be remembered as the nonconformist, who made risks look like well-thought-out strategy.

MS Dhoni was not a natural leader, in fact, captaincy did not come naturally to him. However, he adapted to the challenges quicker than anyone else. The learning process and the calculations inside his exceptional cricketing brain would tick off instantly.

From the outset, he came across as a street-smart cricketer who read the game precisely and that translated into his captaincy effortlessly. Sure there is an element of luck involved, but as the cliched saying goes-fortune does favour the brave and the fearless nature became synonymous with his captaincy.

He was predictably unpredictable and this was where half the battle was won. He added style to substance. He added a method to the madness. He enthralled and entertained and that unpredictability brought about excitement.

Dhoni’s tale in international cricket started off with a run-out and as destiny would have it, ended in an identical fashion. As the day marks an end of an era in Indian cricket, there is so much to look back and cherish!