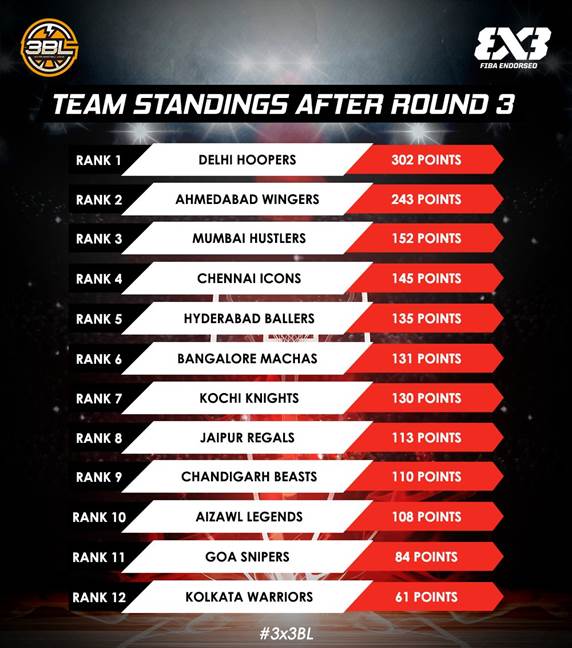 After an extraordinary third round in Kolkata on 7th and 8th July 2018, India’s first FIBA recognized league, 3×3 Pro Basketball League (3BL) will carry the exciting competition forward in Chennai on 21st and 22nd July 2018 at Forum Vijaya Mall, Chennai. The fourth leg will see the addition of the Canada’s #6 3×3 Ranked Player Bikramjit Gill to join with all the Indian and international basketball sensations in 3BL including Leandro Souza de Lima, Inderbir Singh Gill, Kiran Shastri and more putting on their best show.

The Chennai round will witness a very tough and intriguing competition between ‘Delhi Hoopers’ and ‘Ahmedabad Wingers’ as they stand as the top 2 teams post the third round. ‘Mumbai Hustlers’ and ‘Chennai Icons’ will also come strong in the second half of the league to possibly secure a top rank position. The latter 2 teams have played thoroughly well during this season, and have reached the top 4. The fourth round could be a game changer for ‘Chennai Icons’ as well as for ‘Mumbai Hustlers’.

Along with Bikramjit Gill,  Aizawl star and recent Indian National Coaching Camp participant Lalrina Renthlei will be joining Kolkata for the fourth round.

In Round 3, there was a dazzling display of scoring as Kiran Shastri was the top scorer with 53 points and 21 two-pointers, followed by Patrick James McGlynn with 52 points (14 two pointers) and Leandro De Souza Lima with 45, which is itself impressive as he scored all his points inside the 2 point line. Mahesh Padmanabhan, Tamil-Origin Australian International, has been the star player for ‘Chennai Icons’ this season. His coordination with his teammates and deep range two pointers have led him to become one of the top 10 scorers till date. The fourth round will give him an opportunity to outperform his rivals.

Rohit Bakshi, League Commissioner, 3BL, said, “The third round in Kolkata was immensely praised by all of our audiences. We are very proud of the team ‘Delhi Hoopers’ who will now represent India in Japan this month after their eye-catching victory in Kolkata. I am excited for the 4th round and awaiting the unexpected twists and defeats this time in Chennai. 3BL has managed to draw sports enthusiasts who were not passionate about basketball before, and at the same time has urged basketball lovers adapt to the 3×3 culture.”

Vivek Krishna, Entertainment Director, 3BL said, “We had foreseen this success that we are currently witnessing because of the perfect blend of sporting action and entertainment that 3BL possesses. 3×3 basketball is a very entertaining sport and we are proud to be the first ones to bring it to India. Our fans have enjoyed it tremendously till now and we’re sure people in Chennai will feel the same.”

Mr. Umesh Iyer, General Manager, The Forum Vijaya Mall said, ““We are glad to host this event, which will no doubt get in a large target audience as in the past, when we have hosted sporting events at Forum Chennai. Wishing the event organizers the very best”..”

3BL is the first ever FIBA recognized basketball league in India, which has also given international opportunities to Indian players. The third round entailed a historic victory for the team ‘Delhi Hoopers’, who gave an exceptional performance with an incredible gameplay from the current top scorer Kiran Shastri. The team successfully qualified for FIBA 3×3 World Tour leg in Utsunomiya, Japan on 28th and 29th July 2018, where they will play against eleven international teams. This is the first time a team will represent India at an international level for the 3×3 basketball platform.