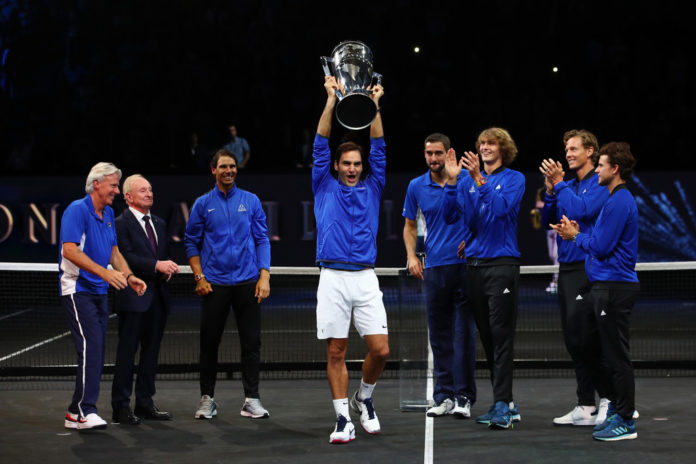 Roger Federer might be getting old but he still has the knack of winning trophies. The 20-time grand slam winner took part in the Laver Cup exhibition event in Chicago. It is an event where Team Europe take on the Rest of the World. As we all know it is played over a course of three days. In the first day, the winning team will be awarded one point for each match and the second day two points for each match and the third day three points. 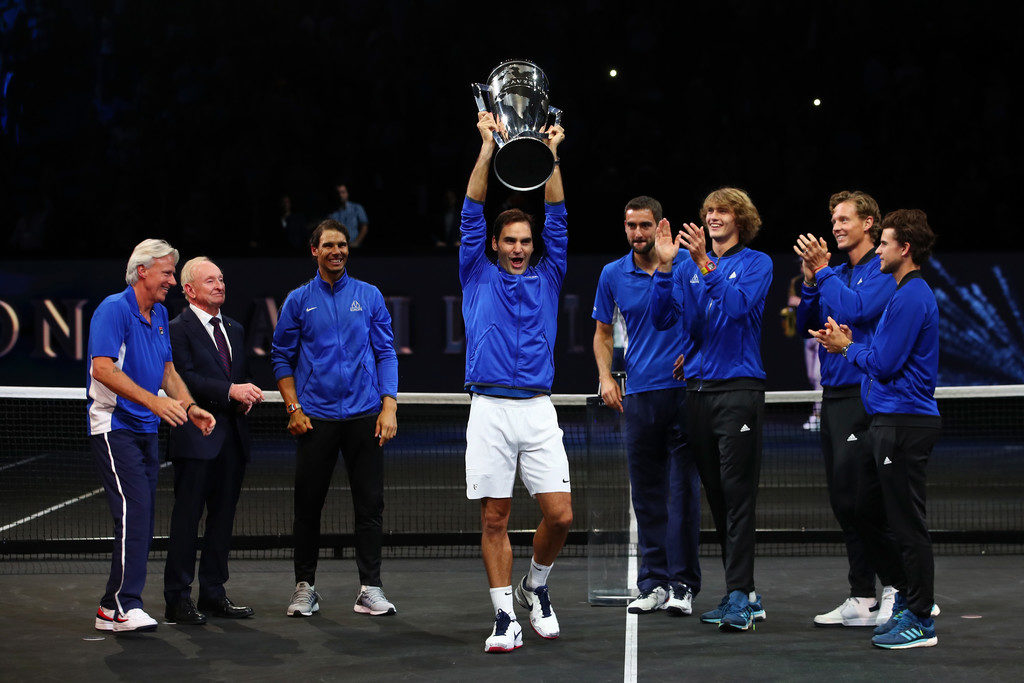 Team Europe started of the day 1 by bagging the first point where Dimitrov won comfortably 6-1 6-4 against Taifoe. Edmund just scrapped through but continued the run by winning the tiebreaker. The score was (6-4, 5-7, 10-6) . D. Goffin got his win in his singles for team Europe.
Who would have No 2 and No 3 seed in ATP singles when they played together in doubles match they would come out as losers. Well, it was a sad day ending for Team Europe although they ended the day in the lead. They saw Novak Djokovic and Roger Federer lose to K. Anderson and J sock. The score ended as 3-1 to Team Europe at the end of day 1

The tennis continued as we entered day 2 with the scoreline 3-1 to Team Europe. Federer and A. Zverev winning their respective matches for Team Europe. Djokovic poor form continued as he failed to win his match against K. Anderson in the tiebreaker with the score being (6-7, 7-5, 6-10). He lost the first set and the tiebreaker. J . Sock and Kyrgios continued a good job Anderson did by winning doubles against G . Dimitrov and D. Goffin.
It was an equal abomination on the second day with both the team winning two matches each. The score at the end of the second day was 7-5.

We enter the decisive day with Team Europe leading 5-7. Team Europe needed 6 points to seal the victory. It didn’t start off great for team Europe lost their doubles where Roger Federer and Zverev lost to Isner and Sock. Looks like Federer is better off when he plays singles as he did win his singles match against Isner (6-7, 7-6, 10-7). Zverev sealed the victory for Team Europe by beating (6-7, 7-5, 10-7). He came back stronger after losing the first set to win the next two sets. It was a scintillating display by Team Europe as they won 13-8.

“I’m just happy to get the win and we defended the title,” the 21-year-old Zverev said after the event.

“I mean, Roger [Federer] is not a good coach, but we will leave that,” he joked.

“No, he helped me a lot, he gave me some tactical advice and it worked because I won the second set and then the match tie-break.

“It was such a close match all around, not only this one but all weekend – a few points here and there and it could have been different.

Team Europe won the inaugural tournament in Prague last year. Next year’s competition will take place in Geneva from 20-22 September.