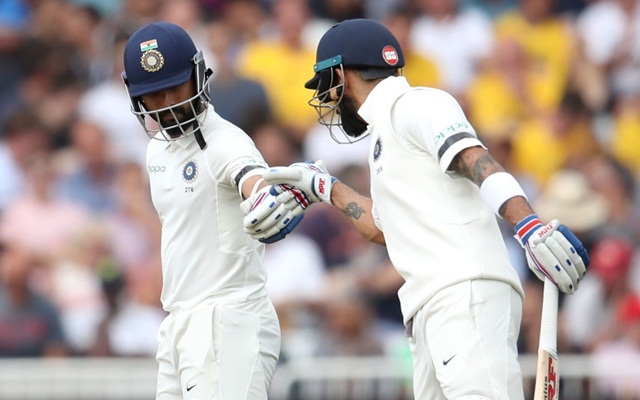 Three years ago, South African batsman Temba Bavuma was so awestruck watching Virat Kohli and Ajinkya Rahane bat against a solid New Zealand team, that he couldn’t help but tweet about their ‘masterclass’ innings. But what he didn’t know, was that the duo and the tweet would come back to haunt him 3 years later during the ongoing Pune Test.

During the 3rd Test against the Kiwis, on October 2016, Kohli and Rahane put up a massive 365-run partnership for the 4th wicket which helped India declare at the score of 557 in the 1st innings. Kohli scored 211 and Rahane just fell short of a double hundred at 188. And Bavuma who enjoyed every moment of their innings, tweeted saying: ‘Kohli & Rahane, could watch these guys bat all day #masterclass #indvsnz’.

Unfortunately for him, that old tweet caught everyone’s eye three years later as the Indian skipper and his deputy, with a partnership of 178, piled on the runs on Day 2 of the ongoing second Test in Pune. Virat Kohli scored a sublime double hundred helping the hosts sail towards a commanding first-innings total on Friday. And Rahane, who was dismissed after scoring an important 59, went through the first session unscathed.

India declared their innings on 601/5 and Kohli, playing his 50th test as the Indian skipper, remained unbeaten at 254. His magnificent innings was supported from the other end by Ravindra Jadeja (91) whose crucial cameo came handy after the hosts lost Rahane just after Lunch.

South Africa meanwhile, have been unable to find an answer for India’s pace attack and lost 3 important wickets (including that of Bavuma’s) at the end of the days play.

Poor old Bavuma, his wish has been finally granted. Literally!