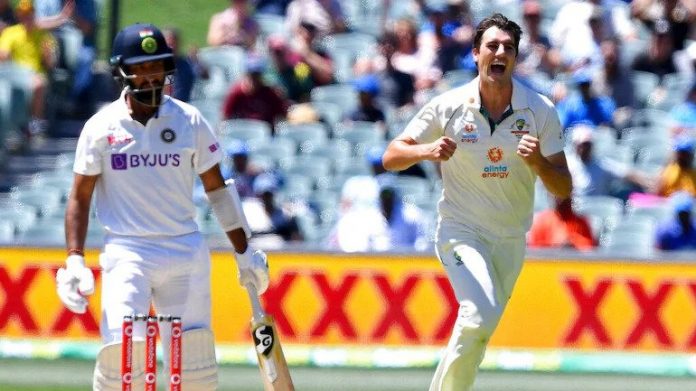 With a lead of 62 and 9 wickets in hand, Team India headed into Day 3 with a slight advantage over the hosts. Australia turned up with a bowling display for the ages as they decimated the acclaimed Indian batting line-up and bowled them for 36 from the overnight score of 9-1.

Pat Cummins was quick to remove the night watchman Jasprit Bumrah for just 2 which brought in Pujara early to the crease once again.

Mitchell Starc shared the new ball responsibilities with Cummins from the other end and created pressure with impeccable bowling. The Indian team were crumbling against the relentless line and length and eventually succumbed to the probing stress.

Pujara was dismissed for an eight-ball duck rewarding Cummins for bowling at the fourth stump channel.

Hazlewood followed up with a sensational over which brought twin dismissals in the form of overnight batsman Mayank Agarwal and vice-captain Ajinkya Rahane. The identical dismissals were crucial as it removed the settled Agarwal who had faced 40 deliveries in the innings and Rahane, who looked in good touch during the first innings.

The wickets kept on tumbling with Kohli’s Australia tour ending with a sharp catch at gully by Cameron Green by Cummins. India were reduced to their worst total at the fall of the sixth wicket in their history.

Cameron Green did well to hold on here!

Wriddhiman Saha and Ravichandran Ashwin followed suit soon after as India’s imminent humiliation reached completion with Adelaide’s iconic scoreboard reading 26-8, much to the hosts’ delight. Josh Hazlewood removed both the batsmen off consecutive deliveries to register his 200th test wicket, but failed to notch a hattrick as Umesh Yadav fended off the decisive ball.

Mohammad Shami had to retire hurt after getting hit on the arm off Pat Cummins. As a result, India were left hanging at 36-9 and set a target of 90 for the Australia courtesy of their first innings lead.

No Indian batsman was able to register double figures while Josh Hazlewood returned figures of 5-3-8-5 with the ball.