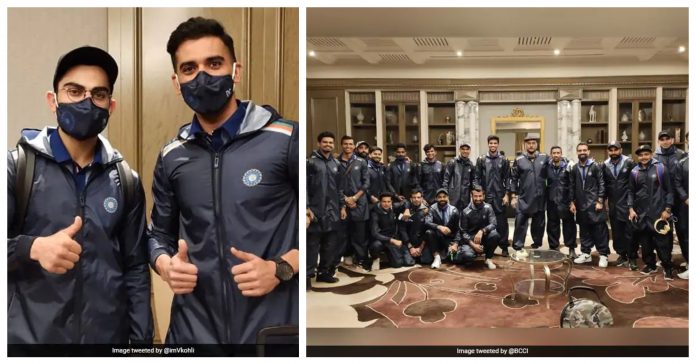 After the conclusion of a successful Indian Premier League 2020, the Team India has boarded the flight for Sydney on Wednesday for the upcoming two-month long tour where they will play both Tests and the limited-overs series. As the players were ready to fly, the BCCI tweeted photographs of the Indian team before their departure where the players can be seen in customised PPE kits for travel amid the crunch time of COVID-19 pandemic.

“#TeamIndia is BACK! Let’s embrace the new normal,” the official Twitter handle of the BCCI posted the photo with this caption. However, most of the players of the Indian team were a part of the cash-rich T20 league and after the end of their respective team’s campaign in the tournament, they moved to the bio-bubble made for the national team in the UAE.

On the other hand, Test specialists like Cheteshwar Pujara and the support staff of Team India had reached last month and entered the national team bio-bubble as well. Notably, the team that departed didn’t feature Rohit Sharma and Ishant Sharma. While Rohit sustained an injury earlier but led Mumbai Indians to a record fifth IPL title on Tuesday, Ishant was ruled out from the league earlier due to internal oblique muscle tear injury and currently at the NCA in Bengaluru for the recovery.

Both of them will join the team later as well. And, Ishant Sharma will be included in the squad after he becomes match fit. Meanwhile, Rohit has been added to the Test squad after his return to the IPL final league game and since then he played the Qualifier 1 and the final against Delhi Capitals as well.

However, India’s Test wicketkeeper Wriddhiman Saha has also sustained injuries to both his hamstrings during a game while playing for Sunrisers Hyderabad on November 3. But he has also departed to Sydney with the team. “A call on his availability will be taken later,” the BCCI had revealed when the revised squad was announced on November 9.

Notably, Team India will undergo a 14-day quarantine in Sydney during which they are allowed to train for the upcoming series where they will play three ODIs, three T20s and four Tests starting November 27.