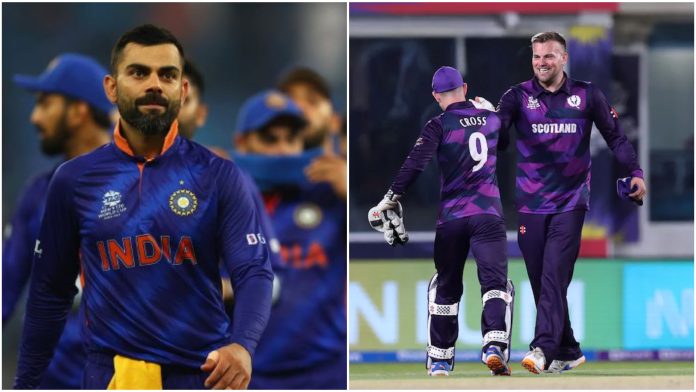 India and Scotland are set to lock horns in the upcoming Super 12 stage fixture of the ongoing ICC T20 World Cup at the Dubai International Cricket Stadium.

India have lost two consecutive matches against Pakistan and New Zealand in their first couple of games. However, they bounced back and ensured their place in the competition by defeating Afghanistan by 66 runs. Virat Kohli’s men have struggled in their first two games suffering disappointing defeats but played brilliantly against the Afghans after immense contribution from both the departments. They will certainly aim to pick up the crucial win to keep the hopes alive to make it into the semi-final.

Scotland, on the other hand, are one of two winless teams and are at the bottom of the points table. They’ve lost all three matches they’ve played thus far and will look to finish their campaign on a positive note. Mark Watt and Michael Leask gave them hope of pulling off the impossible win against New Zealand. Kyle Coetzer’s men faced an astonishing batting collapse to push Namibia to the limit. They will certainly put up a brave fight against the Men in Blue.

India are the favorites and are priced at 1.03 meaning if you bet ₹100 on them and if they win the match, you’ll be making ₹103.

The Men in Blue are strong favorites to win the Super 12 clash against Scotland. India have lost both their opening games but will be heading into the game brimming with confidence as they got past the Afghanistan challenge with ease.

Scotland are on a three-match losing streak. Thus, India are likely to go past them comfortably and add two more points to their tally.