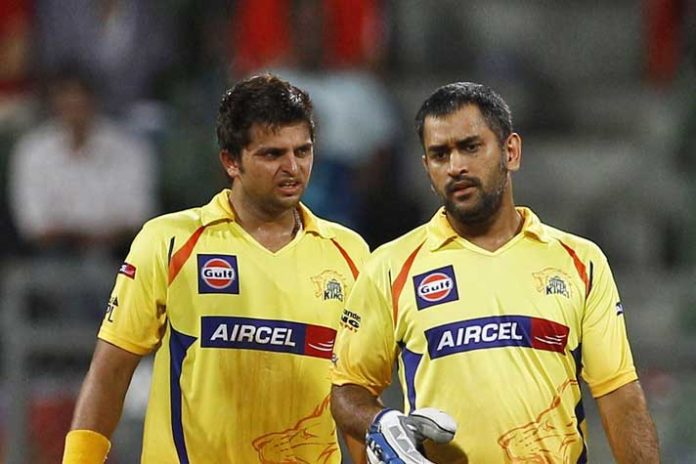 Suresh Raina’s sudden exit from the CSK camp is a significant blow for CSK, the three-time IPL champions, not just for Raina’s statistics but for his sheer presence. With time, Raina has become a mirror image of his revered Dhoni– not just by name, but by deed as well.

The fact that Dhoni trusts Raina to bat up the order, and can throw the ball to him in crunch situations, speaks of his significance. And of course, he may not be a livewire in the field as he once was but Raina still saves you runs in the field with his alert-minded approach.

The 33-year-old, who recently announced his international retirement, travelled with the CSK squad to Dubai and took part in a five-day pre-departure camp in Chennai along with captain MS Dhoni, Deepak Chahar, Shardul Thakur, Ambati Rayudu, M Vijay and bowling consultant Laxmipathy Balaji.

But what exactly went awry for the CSK star has hurriedly flown back home?
There’s a strong notion that Raina decided to give the IPL a miss citing the bio-bubble and the players’ safety arrangments, which left the player petrified and panic-stricken.

Earlier rumours were rife that Raina has decided to snub the riches of IPL citing a family emergency, where his family members were attacked by assailants in Pathankot, northern India.

33-year old Raina, who has a young family is believed to have conveyed CSK management, skipper MS Dhoni and coach Stephen Fleming that he found it rather uncomfortable being locked up in a hotel as a part of the mandatory isolation procedure.

Raina has been an indispensable member of the CSK team and an able wingman to Mahendra Singh Dhoni. He has featured in all but one of CSK’s 165 IPL matches since the inception of the competition in 2008. After playing 158 consecutive matches, the only game that Raina missed was against KXIP with a calf-strain. The southpaw is the second-highest scorer in IPL history with 5368 runs, only behind Virat Kohli’s tally of 5412, and has taken the most catches (102) in the tournament history.

Apart from his impressive numbers for the Super Kings, his presence in the side was seen as a vital cog that binds the team together. His infectious energy on the field often doubled up the impetus to the side in crunch situations.

With less than a fortnight to go for the tournament, finding a player who can fill the shoes of Raina would a difficult task for the Men in Yellow.

@sureshraina3 – you and your family are in my thoughts. You will be dearly missed here @chennaiipl. You have always been the heartbeat of the team so we will be doing everything we can to make you proud. Take care mate and stay safe.

The purists of the game said MS Dhoni and Suresh Raina were an on-field match-made in heaven!

The duo shared an enviable rapport on a cricket field, be in for the Men in Blue or the yellow of Chennai Super Kings. So much so that Raina quickly followed MS Dhoni’s footsteps in announcing retirement from international cricket on independence day.

Dhoni and Raina have shared five-century partnerships in ODI cricket; the most for any pair below number five. The duo also has 15 fifty partnerships while batting together for 5th and lower wicket in this format which also being the highest for any pair.

While MS Dhoni deserves every bit the applause he has garnered for guiding CSK to three titles, one must not lose sight of the fact the in Raina-Dhoni had an able deputy and a workhorse-for whom the team always came first.

Playing for Chennai Super Kings and becoming one of the most consistent performers in the IPL helped Raina become a better player.

A few tales in life are just meant to be like the reel and for Raina, the ultimate supporting actor was one of them!

For CSK it was a real boon that Raina occupied the crucial number three slot nonchalantly. More often than not, Raina would see off the opening overs-to make things easy for Dhoni-who would then take the bowlers for cleaners. The duo share a bond of trust and understanding that goes beyond words.

For the yellow brigade, if MS Dhoni is their ‘Thala’, Suresh Raina is the undisputed ‘Chinna Thala’ -the demigod-yet a fierce MSD loyalist.

As cricket folklore in our country continues to appreciate the once-a-generation geniuses of Tendulkar and Kohli, there is always a special place for the likes of Suresh Raina-who perhaps was not the most gifted, but made a place for himself by sheer hard work and perseverance.

Is Rohit Sharma a better captain than Virat Kohli?