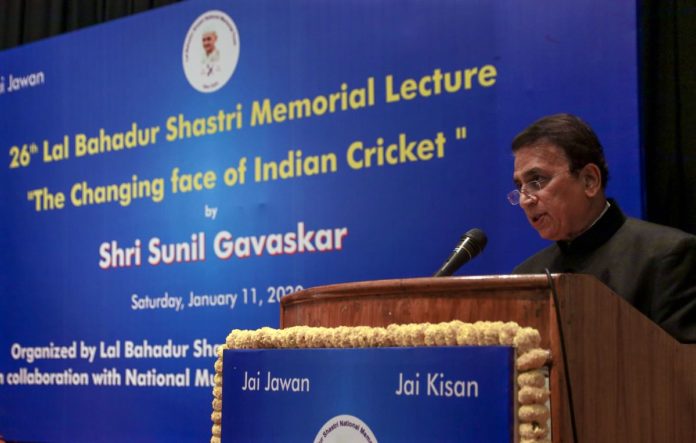 Indian batting legend Sunil Gavaskar is confident that the country will prevail over the on-going “turmoil” by nationwide students’ protests just like India overcame critical situations in the past. On Saturday, while delivering the 26th Annual Lal Bahadur Shastri Memorial Lecture, Gavaskar put his faith on his fellow countrymen to pull through this hour of crisis.

Since the past few weeks, India has witnessed protests in a number of educational institutions after the government passed the Citizenship Amendment Bill last month. Students at the Jamia Milia University were the first to voice out their dissent against this Act; while on January 5th, a masked mob attacked the students of Jawaharlal Nehru University (JNU), which ignited the nationwide students’ protests.

“The majority of them are in classrooms trying to forge their career and build to take India forward. We as a nation can go higher only when we are all together. When each one of us has to be simply Indian. That is what the game taught us.”

“We win when we pull together. India has overcome many crises in the past. It will overcome this as well and emerge a stronger nation. We as a nation can go higher only if we are all together” he advised.

#WATCH Sunil Gavaskar: Country is in turmoil. Some of our youngsters are out in streets instead of being in classrooms&some of them are ending up in hospitals for being out on streets. Admittedly, majority is still in classrooms trying to forge career&to build&take India forward. pic.twitter.com/4Er3jGoqf2

The former Indian skipper as an example of solidarity, chose the 1965 war against Pakistan and added “Our minds go back to one such major crisis in 1965 when our neighbours invaded and got a fitting reply.”

He also urged the students to go back to their classrooms, claiming that it is their main duty.

“I will only tell them to go back to the classrooms. That is their main duty. They have gone to the university to study, so please study,” he concluded.

Sanjay Manjrekar supports JNU protest and wrestler Yogeshwar Dutt fires back at him!