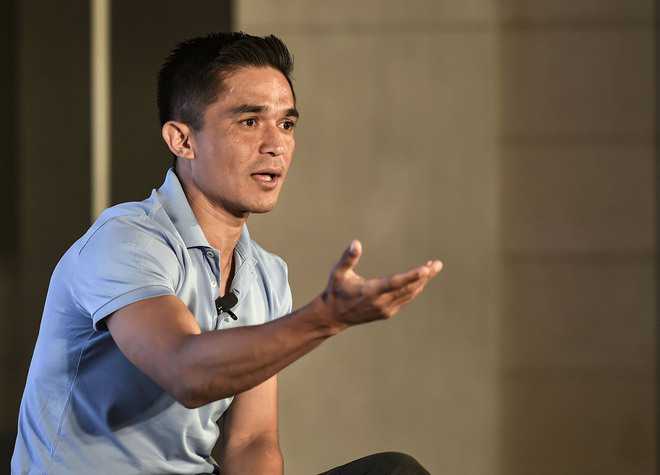 Indian Football Team captain Sunil Chhetri is disappointed with India in the World Cup qualifying campaign but still remains optimistic for the future.

“We will put our best foot forward against Oman and Afghanistan,” claims the prolific Indian striker.

India’s results so far do not include a win. A loss against Oman opened the campaign but an away draw against Qatar inspired the nation back again. The draw against Bangladesh was highly disappointing as it was not expected on paper. Matches against Oman and Afghanistan are to come next international break.

“I think one of them is going to be in Dushanbe because they (Afghanistan) play their home games over there and then against Oman (in Muscat). Both are very difficult and important games, but we back ourselves. If we play the way we played against Qatar, we can do it. We are not scared,” Chhetri said on the sidelines of a Herbalife Nutrition event.

“We felt bad after the game because we felt we could have done a lot better than what we did. We areover it. We will put our best foot forward against Afghanistan and Oman, two away games, which are very important and difficult ones also.

“We do not want to wash away the good things we have done against Oman, Qatar and Bangladesh, we are definitely on a high. We are learning a lot, just hope we continue that,” said one of international football’s leading scorers.

“We are not happy with our performance against Bangladesh. The team played well but our strikers missed a lot of chances, and that’s why we lost two points which we should not have, and that really bothers us.”