India’s Sumit Nagal has moved up 16 places to a career best 174 in the latest ATP rankings after getting past the qualifiers to play the first round of the US Open. 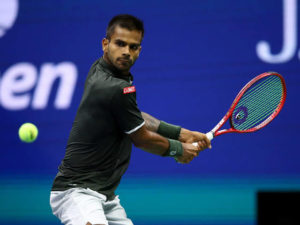 Nagal, however had to exit the first round after drawing himself against the tournament favorite and Swiss master Rodger Federer. Despite losing to Federer by the scoreline of 6-4, 1-6, 2-6, 4-6, Nagal drew praise from many for the commendable performance he put up on show.

Nagal’s first round appearance itself saw him join a unique set of players. He became only the fourth Indian to win a set in the main draw of a Grand Slam in the last 20 years.

Prajnesh Gunneswaran, who was the other Indian in the fray at the US Open too rose three places to be world no. 85. He too like Nagal, suffered a first round exit at the hands of the tournament runner-up Daniil Medvedev.

Meanwhile, Ramkumar Ramanathan moved up one spot to be 176th while Rohan Bopanna dropped four spots to 43rd position in the doubles rankings. Divij Sharan and Leander Paes occupy the 49th and 78th place respectively.

“I will do that early in the game”: Jasprit Bumrah talks about his executions of yorkers