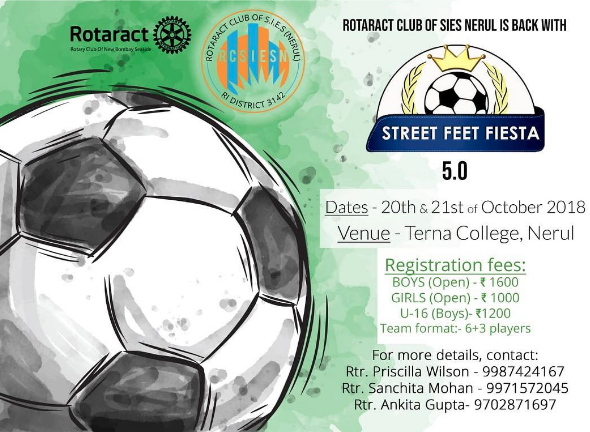 Rotaract club of SIES Nerul will be hosting the fifth season of Street Feet
Fiesta from the 20th to 21st of October. Street Feet Fiesta is a football
tournament organized every year by the members of RCSIES Nerul in
order to promote the sport of football in Navi Mumbai. The
tournament which began in the year 2014, this year will be going for its
fifth season. The initial aim of the tournament was to encourage the
participation of youth in the sport of football but as seasons went by it
soon started focusing on various issues.
The tournament now focuses on trying to bring parents and kids
together by having both parents and students take part in the
tournament. The tournament also tries to improve the participation of women in the sport. 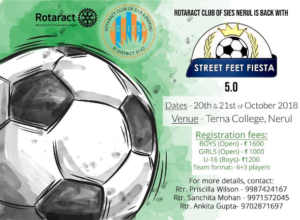 President of RCSIES Nerul, Rtr. Jagruti Bagwe says,
“It is necessary that we have both men and women take part in the
sport. As women start taking center stage in various fields of the
society, SFF stands as one of the platforms where women can showcase
they too are a part of the game.”
This year the tournament will take place in the Terna College, Nerul.
There are a total of 3 categories: Under 16 Boys, Girls (open), Boys
(open). Opening up about the division of groups Rtr. Shruthi Nair,
chairperson of SFF Season 5, says “In the day and age of the internet,
students have stopped going for outdoor sports. It has resulted in them
not focusing on their health and have moved away from their parents.
With SFF we try to rebuild their connection with both their parents and
with health.”
SFF has always focused on social issues. Each season has focused on
some or, the other form of social cause, this year the club is going for a
donation drive. Rtr. Aakash Bhosale says, “Studs and jerseys usually are
not used for a long period of time, the reason being footballers tend to
outgrow them. We at SFF are going for donation drive where we collect
all these old and outgrown shoes and clothes and donate them to an
orphanage.”
SFF invites men and women of all ages to take part in the tournament,
are you game?