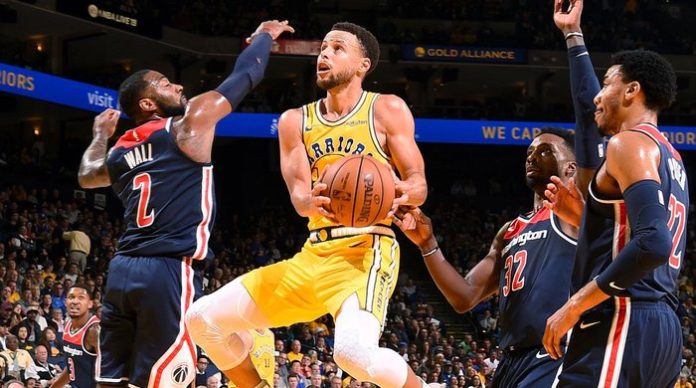 Blake Griffin scored 50 points yesterday for Detroit, which were the most points scored by anyone this season in a game. Sadly for Blake, his moment in the sun was brief, thanks to Steph Curry.

Curry scored 51 points for the Warriors against the Washington Wizards in a 144-122 win. He was 15-24 from the field, which included 11 three-pointers. He played for only three quarters, which makes his feat all the more impressive. 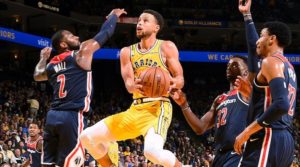 We have become accustomed to the incredible shooting exploits from Curry, but they don’t cease to wow us. He got off to a flying start, notching up 23 points in the first quarter.

He was absolutely feeling it, and take a look at this shot after the wihstle had sounded.

Steph Curry is not human pic.twitter.com/fUmiDW886p

Curry has now made more threes than four entire teams this season, which is another testament to his three-point prowess.

Steph Curry has made more threes this season than four entire teams. pic.twitter.com/MG2Qm4GsMB

He is right up there with the all-time greats from beyond the arc, and stats like these blow our mind.

Steph Curry: 6
Every other player in NBA history: 7 combined

Kevin Durant’s 30 points went unnoticed due to his teammate, but he too was gushing with praise. “It was a joy to be on the same court as [Curry],” said Durant. “That was sick. … He’s a pure artist, and tonight it was no different.” We concure with you KD. Sick indeed.