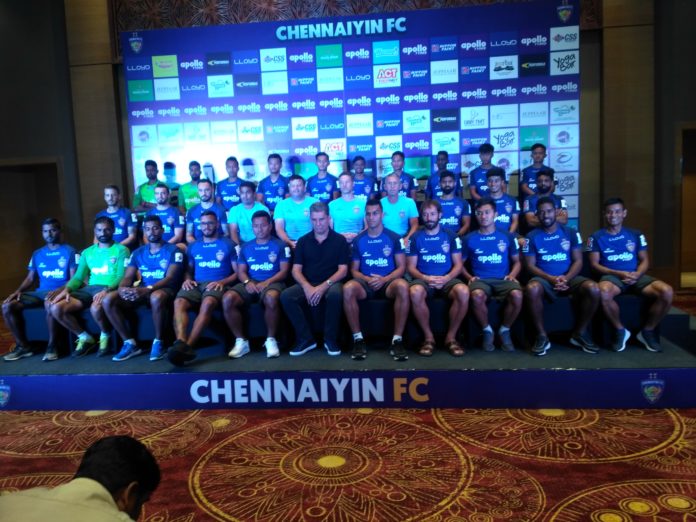 Defending champions of the Hero ISL, Chennaiyin FC announced their 25-men squad today, who are set to represent the club for the forthcoming season that starts this Saturday.

Team’s coach John Gregory addressed the gathering briefly before introducing out each and every player and support staff who are part of the squad to take part in this 5th edition of ISL.

Mailson Alves who scored in the finals of the previous edition has now been made the captain of the side after the club failed to agree a contract for Henrique Sereno. Apart from that the usual suspects of midfielders Raphael Augusto and Gregory Nelson, and, defender Inigo Calderon make the squad.

Midfielder Andrea Orlandi, who played with Inigo Calderon at Brighton and Hove Albion, and forward Carlos Antonio are the new foreign signings.

In the Indian player’s list, youngsters Issac Vanmalsawma, formerly of FC Pune City and Srinivasan Pandiyan of Chennai City FC have been selected. More youth talent have been added to the squad with the likes of Hendry Antonay, Bedashwor Singh and Zonunmawia this time around.

But the club is set to face a major setback as one of their key players and local boy, Dhanpal Ganesh is set to miss the first few weeks of the tournament due to injury.

Once having finished announcing the squad for the forthcoming season, the coach and the players stayed back for a short press conference.

When asked on how much pressure they have had to face being the defending champions, Gregory said that they have had no pressure and were looking ahead to the start of the season. He also added that the players were looking relaxed just like how they were when they faced BFC in last season’s final.

Jeje Lalpekhlua, who has been with the squad since the inception of the tournament said that he could see developments every year with the team. He said that the quality of the foreign players, who have been with the team have always influenced them in the right direction.

Gregory who was then asked on how he was going to utilise his youngster’s for the season, he said that the right time will come when they’ll be given a chance. Gregory also added that Ganesh, who wasn’t even part of the squad in the first half of last season got to play a major role in winning the title in the second half of the tournament.

Mailson when asked about his new role as captain said that he was looking forward to the challenge and will be looking to emulate what Sereno did to the club last season.

Andrea Orlandi then admitted that Inigo Calderon had a huge part in influencing him in joining the ISL Club. He said that he would contact Inigo regularly who would always give him a positive feedback about the club.

The team’s assistant coach Sabir Pasha then answered the final question in the presser. When he was asked on whether the current squad was better than last year’s one, Pasha said that they couldn’t be compared and both of those teams look good.

Chennaiyin FC are trying to become the first side to defend their title successfully. They will have their task cut out as they’ll face bigger challenges ahead of them with the international breaks and AFC cup commitments. They kick start their campaign away to BFC this Saturday.