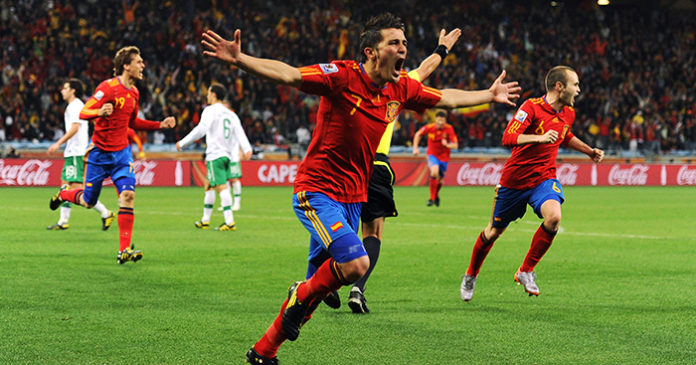 End of an era! Spain’s all-time top-scorer David Villa, on Wednesday, announced that he will be retiring from the beautiful game next month. The superstar striker has had a glittering career winning the World Cup, the European Championship and the Champions League, in a journey which started from Sporting Gijon and will terminate at Vissel Kobe. The 37-year-old, in today’s press conference said that after 19 years he will call it a day at the end of the 2019 J-League season.

After 19 years as a professional, I have decided to retire from playing football at the end of this season. Thank you to all the teams, coaches and teammates that have allowed me to enjoy this dreamed career. Thank you to my family, that has always been there to support me. pic.twitter.com/E82vb3tNwT

One of the greatest forwards of his generation, Villa graduated form Sporting Gijon’s youth academy before joining the senior side in 2001. After 38 goals in 80 appearances he joined Real Zaragoza, where he would go on to score 32 in 73 games. Clinical with both his feet, Villa quickly became a household name when he joined Valencia in 2005. In the 5 years of his stay, his attacking prowess grew exponentially when he formed a formidable partnership with compatriots David Silva and Juan Mata; ending up with 108 goals in 166 caps.

And that did not go unnoticed, as Villa was an integral part of the Spanish side, that won the Euro 2008 and the 2010 FIFA World Cup. Soon after he was signed by FC Barcelona, a club where he would win two La Liga titles, one Spanish Super Cup, one UEFA Super Cup, one Club World Cup and the most prestigious of them all, the Champions League in 2011. In the final against Manchester United, Villa scored an outrageous 25-yard goal in Barcelona’s 3-1 victory at Wembley Stadium.

‘El Guaje’ joined Atletico Madrid for a single season in 2013, won the title, and left for Major League Soccer side New York City FC. His MLS career was similarly successful, as he netted 80 times in 124 appearances. Villa was New York City’s first-ever signing and was the first goal scorer at the Yankee Stadium in their opening home game against New England Revolution.

With 59 goals in 98 games Villa is also Spain’s all-time top-scorer, 15 more than the next name on the list, a certain Raul Gonzalez from Madrid.

Villa will reportedly become an investor in Queensboro FC, a franchise based in Queens, New York which plays in the second tier of US football.

Thank you for the memories El Guaje! Happy retirement!