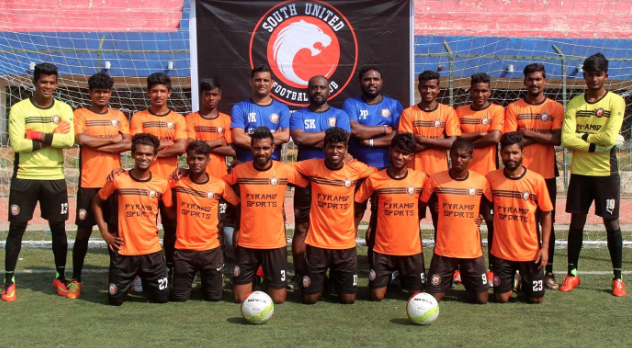 Four players have joined South United FC from the ranks of the Delhi Dynamos FC team, primarily having represented their reserves. Kishan Singh Thongam is among this influx of young talent, but he’s already got an impressive resume as he appeared at multiple levels for the Junior Indian National Team and played in the I-League Second Division for the DDFC Reserve Team.

Krishan Kumar and Sudipta Malakar arrived from Delhi Dynamos FC as well, both with tremendous reputations of contributing to the DDFC team in the last I-League Second Division campaign.

Another joinee on a season-long loan from DDFC, Amit Tudu charted a similar course having made appearances for India at U16 and U19 levels before playing for the DDFC Reserves. His flexibility in being able to play multiple positions in the defensive third provides South United FC with multiple
options to deploy his skills.

Among the new signings is Subhankar Adhikary, an experienced campaigner at a young age, having previously represented clubs in the Kolkata League Division 1, U19 I-League, and the U19 IFA Shield before moving to FC Kerala. The 2017/18 saw him play in the Kerala Premier League and the I- League Second Division, as the captain of FC Kerala and he brings those leadership qualities to South United FC now.

The 6-foot tall central defender Sajid Hossain also joins the fray at South United FC from FC Pune City. He was a part of their set-up for the last 3 seasons, including in the I-League Second Division last season.

22-years-old defender Nitesh Aswani arrives from FC Pune City as well. His last season spent with the FC Pune City captaining the reserve team in the I-League Second Division should serve as great experience that South United FC can capitalise on in this campaign.

Having earned his stripes at the Royal Wahingdoh Academy, 21-year-old Rungsing Muinao attracted a few eyeballs with his impressive performances in the Chennai League and Calcutta League. On his previous foray in the I-League Second division he scored 3 goals in 6 starts with Delhi United. He also scored 10 goals in 11 games for them in the Delhi League. His team-mate at FC Bardez, goalkeeper Royal Basumatary also made the cut for SUFC.

K. Lalmalsawma impressed at an early age playing at BVT FC to make it into the Mizoram State Team and at Chhinga Veng FC before joining the ATK team set up. The youngster joins on loan from the Kolkata club.

At the average age of 22, the influx of talent and potential of the 14 names added to the roster will bring an exciting brand of football for the fans of Bengaluru to appreciate. 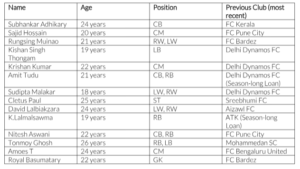