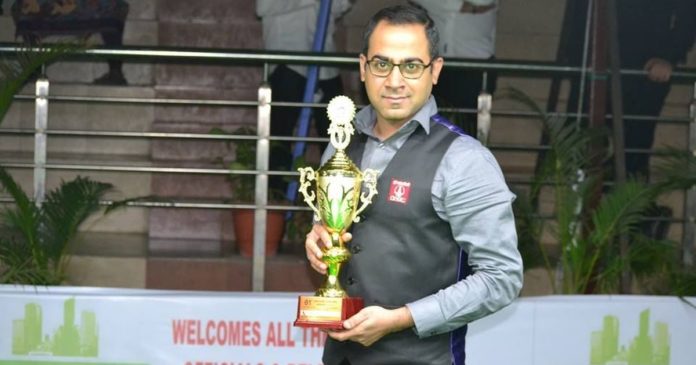 Sourav Kothari of India overcame Singapore’s Peter Gilchrist with a scoreline of 1134-944 in the final to win the 2018 WBL World Billiards Championship at the Northern Snooker Centre in Leeds on Friday.

The former national and Asian Billiards champion only became the third Indian after Geet Sethi and Pankaj Advani to win the World Championships in the modern era of cue-sports. This victory puts the Calcutta-based cueist in an elite class of his own.

In the nail-biting contest, it was Gilchrist who had the upper hand in the beginning after managing breaks of 83, 216 and 63 to go ahead by 130 points. However, the son of former World Champion Manoj Kothari lodged a fierce comeback to reach a commanding break of 305 and lead by 170 points. Gilchrist, did well enough to reduce the deficit in a number of occasions, but Sourav never allowed him to take the lead. Finally, the Indian triumphed after wrapping up with a final blow of 93 to win the title.

“It’s the most significant title of my career so far. It really means a lot to me and nothing can match this,” the newly crowned World Champion told the Telegraph after his emphatic victory.

The Sportsindiashow team wishes Sourav Kothari and rest of the Indian cue-sports fraternity all the best for their future endeavors.

Exclusive with Laishram Thompson Kuman: Almost turned professional when I was just 15!

Wasim Jaffer steps down as Punjab Kings coach; announces departure with a meme

SPOX claim that Bayern have already decided to sack Kovac

Yet another Arsenal player is touted to join Man United…and it’s Aaron Ramsey this...