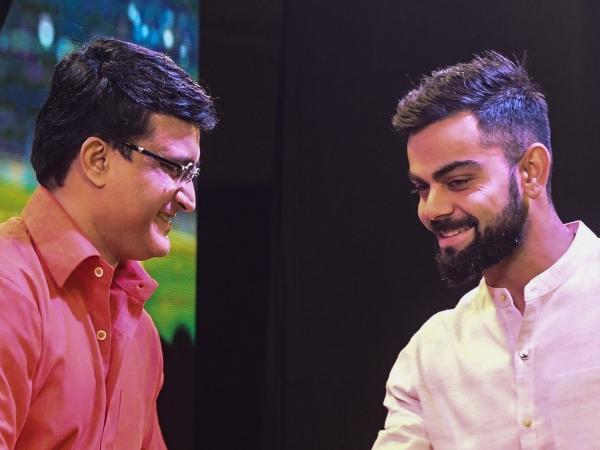 It took BCCI president Sourav Ganguly, “just three seconds” to convince skipper Virat Kohli into playing a Day/Night Test match against Bangladesh. After taking the realm a few days ago, the former Indian captain made some revolutionary changes to Indian cricket. During his days as the technical committee chairman three years ago, Ganguly introduced pink ball at domestic level, and now has was successfully changed the Indian Cricket Board’s stance on Day/Night Tests. India will play their first ever pink ball Test against Bangladesh in Kolkata from November 22 onwards.

“Honestly I don’t know why and what was the reason they did not want to play and accept the D/N Test (in Adelaide). I met him for an hour and the first question was we need to have day/night Tests and the answer in three seconds was let’s go ahead and do that,” Ganguly revealed in an interview.

Last year, the Men in Blues turned down an opportunity to play a Day/Night Test against Australia in Adelaide, while another scope to host the West Indies for pink ball cricket was also put down for some reason.

“I really don’t know what happened in the past and what was the reason but I found him absolutely acceptable to play D/N Tests. He realises and thinks that empty stands in Tests is not the right way forward.” Dada stated.

He also believes that the inception of this new style of Test cricket will gain popularity in the Indian sub-continent during a time when the longest format of the game faces the danger of zero attendance.

“People’s lives have changed, you cannot leave offices so that’s when you have to make adaptability. That’s important. Most number of times change is good. A lot of time, we hold on to things thinking what you believe is right.”