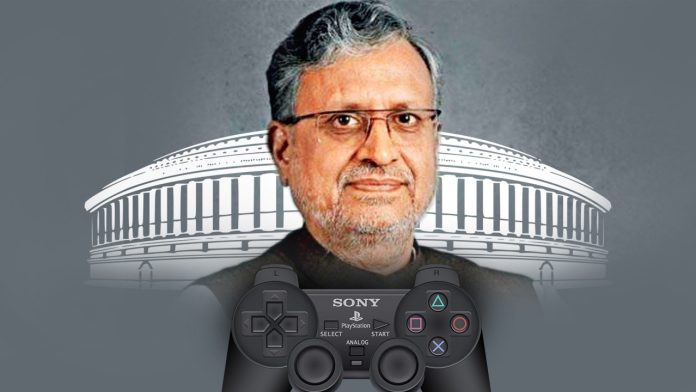 “Crores and crores of youngsters have become addictive to online gaming. As it is online, it is very difficult to prevent kids from getting addicted.” Such words may sound a bit excessive at first, but when they are spoken in the Rajya Sabha by a politician like MP Sushil Modi, they better be heard and considered carefully.

Senior Bharatiya Janata Party leader and member of the Rajya Sabha Sushil Kumar Modi has an impressive biography as a professional politician with some military and student union roots. Most notably, he has been Minister of Finance of Bihar for 13 years and Deputy Chief Minister of the state. His “efficiency and knowledge” as chairman of the GST committee were praised by the 2009-2012 Union Minister of Finance and senior leader in the Indian National Congress Pranab Mukherjee.

“And now this online gaming has been converted into gambling or betting. And now there is a controversy whether it is a game of skill or it is a game of chance,” with these words MP Modi continued his speech during the parliament’s Zero Hour on December 3.

Permissions for Zero Hour submissions in the Rajya Sabha are granted by the chairman quite rarely and “only under very exceptional circumstances or extreme urgency”. Sushil Modi’s submission was not only permitted, but it also caused a reaction from the chairman of the house Muppavarapu Venkaiah Naidu who addressed the Minister for Communications, Electronics and Information Technology Ashwini Vaishnaw with the words: “Consult the Law Ministry and do the needful. It’s a big menace.”

Urge for Regulation to Fight Addictions

Taxation is Modi’s main area of expertise, but his chief concern is the spread of gambling addictions well illustrated by the increase of the average weekly time spent on mobile games in India to four hours now from the 2.5 hours before Covid changed the world. Modi also quoted studies estimating the sector’s current revenues at ₹13,600 crore generated by 43 crore gamers and expecting the market to reach ₹29,000 crore and 65.7 crore users by 2025.

Highlighting the failed attempts to ban online gaming of several states, namely Tamil Nadu, Telangana, Andhra Pradesh and Kerala, whose law amendments were declared invalid by their respective high courts, Modi urged for a comprehensive national regulation framework that would be able to stop the kids from getting addicted.

Indeed, leading global examples of national regulations on online gaming like the UK or Sweden show a growing focus on customer protection that shields users from excessive losses of money, malicious or odds-tampering platforms and addictive gaming patterns. Special attention is given to responsible gaming  mechanisms that protect gamers from risk behavior and provide help and support to people vulnerable to addiction problems. Particularly for India, an implementation of the nation’s unique Aadhaar identification system within gamer profiles would provide an easy and effective solution to user age verification.

National regulation on the most popular form of gambling – sports betting, can shift money flows away from black market operations, illegal bookies and encrypted chats that offer no protection to users to legal and locally taxed online cricket satta bazar platforms which conform to contemporary responsible gambling standards.

This is especially important in view of the reportedly rising number of suicides during IPL season and various estimates evaluating the Indian sports betting market at anywhere between ₹3 and ₹10 lakh crore.

Significantly lowering the social cost of gambling in an effective way is the main aim of a comprehensive regulation framework on a national level, but we should not underestimate taxation and the potential of publicly funded welfare programs to improve the Indian’s standard of living. Legalizing and taxing blackmarket and offshore money flows and enhancing collection rates can have a substantial effect on a Covid-riden economy, while effectively addressing the addiction menace that MP Sushil Modi speaks about.