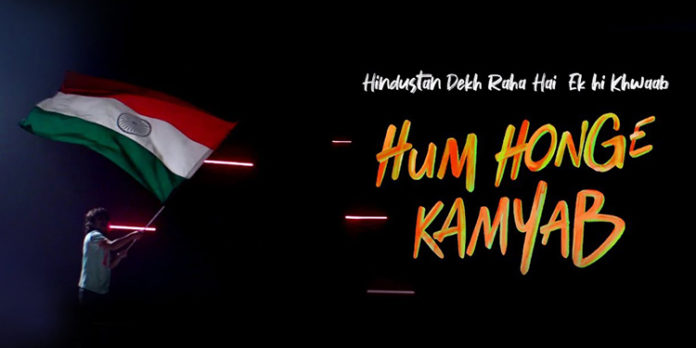 Sony Pictures Sports Network kicks off its one-year countdown to the Olympic Games Tokyo 2020 with a rallying cry,

Sony Pictures Sports Network (SPSN), the official broadcaster of the Olympic Games Tokyo 2020, kick-starts its initiatives for the upcoming prestigious multi-sporting event starting with its on-air campaign, ‘Hum Honge Kamyab’. SPSN marks the one-year countdown to one of the world’s greatest sports event with the telecast of a series of Olympic Channel shows, which includes India-centric content to further familiarize the audiences with Indian athletes and Olympic sport disciplines.

‘Hum Honge Kamyab’ is a call that invokes a strong sense of national pride for our athletes and rallies the nation to unite in a state of support for our athletes for Tokyo 2020. The inspiring campaign also aims to motivate the athletes to put their strongest foot forward for the biggest sporting event in the world and make the nation proud through the journey to win medals. The film showcases aspiring athletes in training, inspired by their real-life heroes and past Olympians. The track is a stylized version of the anthem, ‘Hum Honge Kamyab’. The sentiments of the nation are echoing – Hindustan dekh raha hai ek hi khwab, Hum Honge Kamyab.

With less than 365 days to go for Tokyo 2020, a specially customised programming line-up of Olympic Channel content will also be aired on SONY TEN 1 channels every Friday at 8:00 PM. The content will include India-specific series, which will be aired under “Hum Honge Kamyab!” and non-India content under “The Olympic Dream”.  Under the “Hum Honge Kamyab!” series, the sports network will air “Land of Legends” that highlights the stories of India’s medal winning hockey teams followed by other episodes “Can’t Stay Down” about India’s wrestling akharas, “Foul Play: Dutee” featuring the story of Dutee Chand’s trials with gender testing policies and “Shakti: India’s Super Women” featuring Indian female athletes Dipa Karmakar, Deepika Kumari, Sakshi Malik and Sandhya Shetty who have overcome unmatched obstacles to achieve their sporting dreams. “The Olympic Dream” programming includes episodic series like “Unforgettable Olympic Moments”, “The Olympics on the Record”, Olympic documentaries from Five Rings Films and much more.

SonyLIV will also launch an Olympic Channel section on their app entirely dedicated to their content featuring 50+ original series and more than 10 films that includes “Heroes of the Future”, a chronicle of tomorrow’s budding athletes, “Olympian’s Tips”, an inroad into the world of coaches and athletes, Gold Medal Entourage”, “Sports Swap”, and others.

sporting event, Olympic Games Tokyo 2020. With less than one year to go, the preparation for Tokyo 2020 is underway for the Indian contingent as well as Sony Pictures Sports Network. Our endeavor is to let our athletes know that the whole nation is behind them on their yearlong preparations with our war cry, “Hindustan dekh raha hai ek hi khwab, Hum Honge Kamyab” stylized around one of the most inspiring anthems. It is a very proud moment for our network to launch this movement and we are further supporting it with our year-long programming initiatives that will bring the inspiring stories of the best Indian and international athletes like Dipa Karmakar and Sakshi Malik to our viewers.”

The Olympic Games is the world’s largest and most prestigious sporting event, which sees participation from the best athletes representing over 200 countries across sports disciplines. India has participated in the Olympic Games since 1900 and the athletes have won 28 medals at the Summer Games so far. The Olympic Games Rio 2016 saw participation of 117 Indian athletes across 15 disciplines, with 54 female athletes. Our decorated athletes, PV Sindhu and Sakshi Malik won medals for India at Rio 2016 with the former’s silver in badminton and the latter’s bronze in wrestling.

Watch “Land of Legends” exclusively on SONY TEN 1 and SONY TEN 1 HD on 2nd August 2019 at 8:00PM. Binge on a new series every Tuesday and Friday only on SonyLIV.