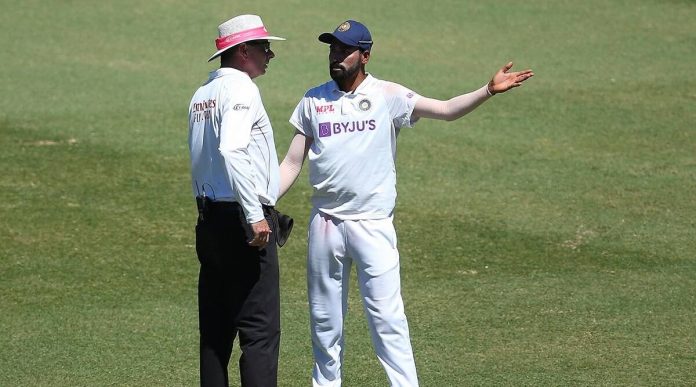 While Team India successfully registered a convincing win in the four-match Test series, they had to face racial abuse as well. However, Cricket Australia has recently informed the ICC that they were unable to identify those people who racially abused Indian players during the Sydney Test. They also added that the six people who were removed from the stadium were not the actual people who did this, a media report shared the news on Tuesday.

‘The Age’ has reported that the CA investigators “have cleared the six men ejected from their seats during the Sydney Test of racially abusing Mohammed Siraj.” CA has already sent the report to the ICC as the ICC had given them 14 days time to lodge a report as well.

“CA, which is awaiting a final report from NSW Police, is satisfied that the six men who were walked out of the lower tier of the Clive Churchill and Brewongle stand by police on the fourth afternoon of the Test did not make remarks of a racial nature to players,” the newspaper said. “The report (of CA to the ICC) says while they believed players had been racially abused, CA investigators were unable to identify the culprits.”

Moreover, the game was stopped for a few minutes on the fourth day of the third Test on January 10 after Indian pacer Mohammed Siraj complained of racial abuse from the crowd. This led the security personnel to enter into the stands and check who did it and they made six people leave the stadium too. Later, the BCCI had lodged a formal complaint and the CA had offered an apology too.

The newspaper report further added CA “interviewed multiple Indian players and took witness accounts from spectators, among them people who contacted CA to volunteer what they saw and heard during the match.”

“Sources now say the Indians had warned on the ground that they wouldn’t resume play until their complaint was acted upon,” the newspaper again shared. “CA was told the men were singing to Siraj, who after complaining to umpires then pointed in their direction when police arrived.”

However, Cricket Australia has confirmed on Wednesday that India players had faced racial abuse from the crowd during the third test in Sydney and also added that they will continue their investigation process after those six men who were removed during the match were not guilty.

The incident took place when Siraj was fielding near the fine leg boundary after having conceded 17 runs in an over. He went to the two on-field umpires on Jan. 10 and indicating towards a section of the crowd. His captain and teammates backed him as well.

Cricket Australia’s head of integrity and security, Sean Carroll, has already issued a statement Wednesday saying an investigation has done and they found those six people were not involved in it. Carroll again shared a report into the crowd behaviour has already been submitted to the ICC, and New South Wales state police were still investigating on this matter.

CA again confirmed that CA’s own investigation remains open, with CCTV footage, ticketing data and interviews with spectators still being analyzed to identify those spectators. However, India ensured the third Test at the Sydney Cricket Ground ended in a draw whereas they won the Brisbane Test to clinch a 2-1 series win as well.