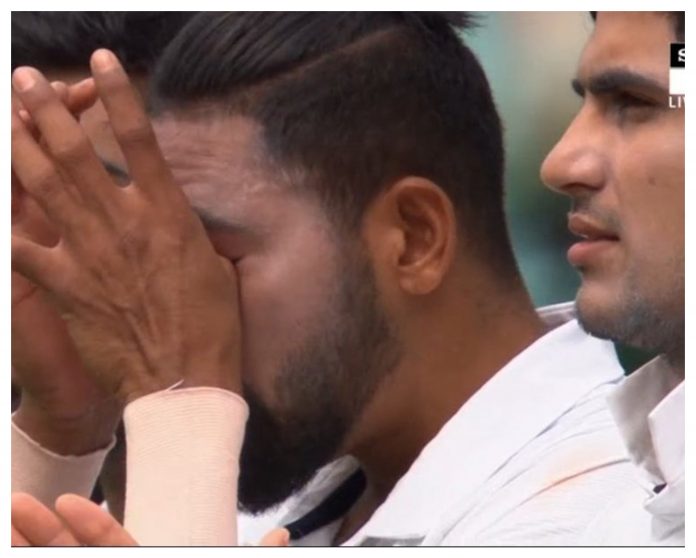 Representing one’s country has to be one of the fulfilling feelings to exist. Athletes savour each day playing for their nation and Mohammad Siraj’s reaction proves the same. The pacer was moved to tears after a spine-tingling rendition of the Indian national anthem at the Sydney Cricket Ground.

National anthems of both the nations were played before play for the players as well as the reduced 10,000 spectators. After the Indian national anthem was played, Mohammad Siraj was clearly moved and proceeded to dab his eyes to remove the tears. The 26-year-old was then met with a friendly smile by the leader of the pace attack Bumrah soon after, who consoled him as they took the field. Watch the incident below:

Siraj had tears in his eyes when India were reciting national anthem.

Before the day’s play, Australian captain Tim Paine won the all-important toss and elected to bat first. The hosts introduced David Warner and debutant Will Pucovski into the lineup with Joe Burns and Travis Head making way.

Team India, who had already revealed their playing eleven a day before, handed a debut to Navdeep Saini who replaces Umesh Yadav. The experienced pacer became the third pacer to be ruled out of the series following a calf injury.

Siraj certainly got motivated with the goosebumps as he proceeded to remove the all-important wicket of David Warner in his second over itself, with only 6 runs on the board.

India off to a good start as Siraj dismisses Warner for 5 #AUSvIND pic.twitter.com/5IPcYkmbvb

The pacer dished out a tempting delivery outside the off-stump for the left-hander to chase. The ensuing edge was grabbed safely by Cheteshwar Pujara at first slip.

As of typing, the play has stopped due to rain with the score reading 21-1 after 7.1 overs.