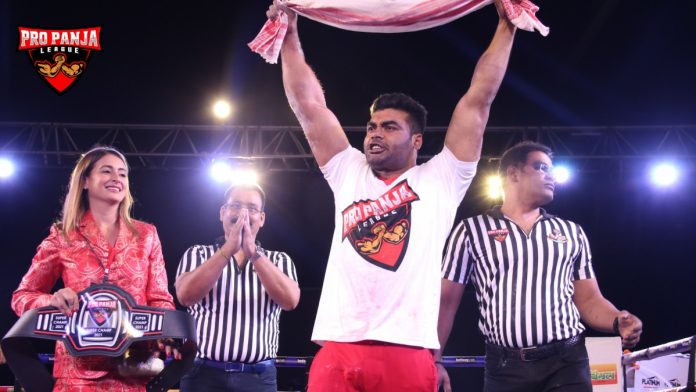 Siddharth Malakar was also the inaugural 90 kg champion in the PPL’s first ranking tournament which took place at the Thyagaraj Stadium in New Delhi in 2020. He then took part in Pro Panja League Mega Matches-2 which took place onboard the Majestic Pride Casino Ship in Goa.

Sports India Show had an exclusive chat with Siddharth Malakar to talk about his preparation for the upcoming event.

1.) How excited are you for the upcoming Tournament?

2.) How is your training going on?

3.) Do you have specific diet plans to get into the weight you want to be?

“ In the off-season when we don’t play any matches, we do a lot of cardio and during that period we tend to lose weight while some arm-wrestlers look to gain weight, some of them try to lose weight. Soo during the off-period  I lost a lot of weight as I also don’t eat any kind of junk food. I have also started doing a lot more strength training. Previously I was at 85 kgs now I am at 90 kgs.”

4.) what type of training are you doing?

5.) How has your experience been with PPL?

“My experience with PRO PANJA LEAGUE has been amazing. From the moment it was announced in 2019 and then it happened in 2020, from that time onwards I was really happy and Excited. The first time I played PPL, it feels like it was yesterday. I still feel like a pro player. PPL has changed the mindset of every arm-wrestler across the country and a lot of arm-wrestlers have come up and many people who didn’t know about the sport have shown their interest in arm-wrestling. So the Journey has been good and I am always excited to play for PPL.”