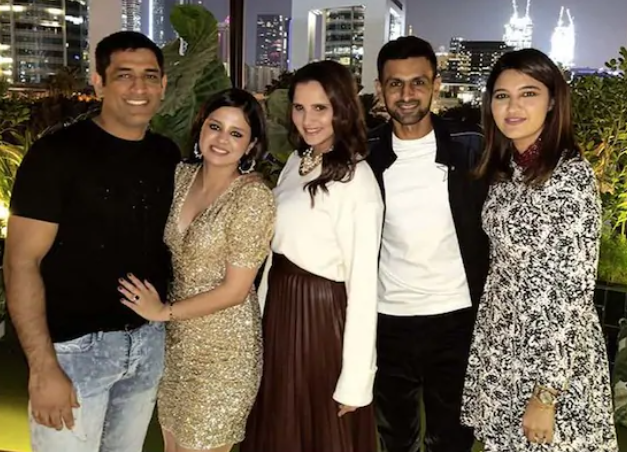 On Thursday, Sakshi Dhoni, the wife of MS Dhoni has celebrated her 32nd birthday and everyone around the corners started wishing her – be it fans or anyone from the cricketing world. Notably, she was in Dubai for the birthday celebrations along with her daughter Ziva and MS Dhoni.

However, Dhoni and Sakshi had some special guests in the celebration as ace tennis star Sania Mirza, her husband as well as Pakistan all-rounder Shoaib Malik joined the celebration as well in Dubai. Meanwhile, Sania Mirza posted an Instagram story where she can be seen with Dhoni, Sakshi, Shoaib and her sister Anam as well. “Fun Times,” she added this caption with a heart emoji while sharing the picture on social media.

As far as MS Dhoni’s game is concerned, he had a rather dismal season with Chennai Super Kings (CSK) in the recently-concluded Indian Premier League (IPL) in Dubai. Under Dhoni’s captaincy, Chennai, for the very first time in their history of the cash-rich league, failed to reach the playoffs as well.

Dhoni, who played his first competitive cricket after the 2019 World Cup semi-final, looked out of form and could only manage 200 runs from 14 games in the 2020 edition of the Indian Premier League. His scores came at an average of 25 and a strike-rate of 116.27 as well. However, before the tournament starts, Dhoni announced his retirement from international cricket as well.

On the other hand, there were rumours that this IPL would be the last for Dhoni but he cleared the air in the final match of the group league stage and added that he will play in the next season too, working on the loopholes and hoping to turn the table for the three-time IPL winning team – Chennai Super Kings.

As far as Shoaib Malik’s game is concerned, he was last featured in the Pakistan Super League Eliminator 1, where he has played for Peshawar Zalmi as well. Malik’s pivotal knock of 39 off 24 deliveries went in vain as Peshawar were knocked out of the tournament after facing a five-wicket defeat to Lahore Qalandars.