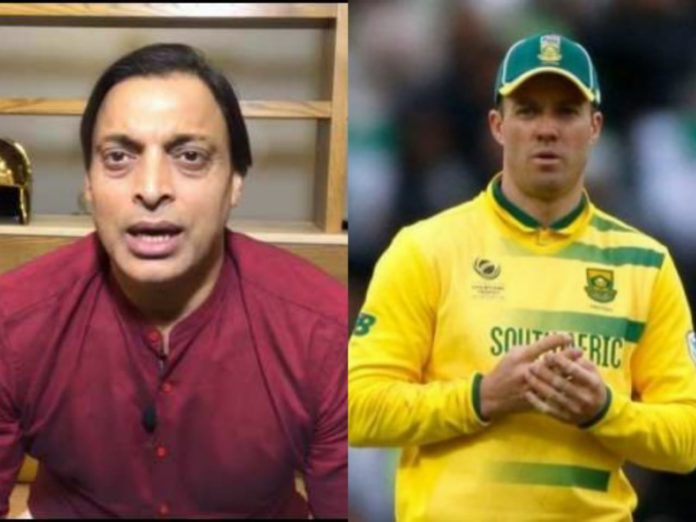 Ab de Villiers recently made a statement where he said that he wanted to play the World Cup. However, this statement came months after he retired from International cricket. This statement has been big news and it has been taken up by many experts.

Former Pakistan cricketer had a lot to say on this incident. So, to make his voice reach

out to maximum people, he made a dedicated YouTube video on this incident.

In this video, Akhtar was seen accusing AB of choosing ‘money over the country’. According to Akhtar, Ab de Villiers decision to retire was driven only by the monetary gains.

“Recently AB De Villiers announced that he wants to play for South Africa in the World Cup. This is big news but why is he issuing such statements when South Africa are down and out,” Akhtar said.

“Firstly, people must not forget that there was pressure on AB De Villiers to leave IPL and PSL contracts and make himself available for the World Cup. However, he chose the IPL and PSL, announced an early retirement and recused himself from the World Cup.”

Akhtar further added that de Villiers had two world cups remaining, the 2019 ODI World Cup and the 2020 World Cup, which will be a T20 one.

Shoaib Akhtar ended the video by saying that had Ab de Villiers been there for this World Cup, South Africa could have been in a better position.

“Forget about your country. Now your country is down and out because of you. Had you been there in the middle-order for South Africa then maybe they would not have performed so badly in the World Cup and who knows they could have also scripted a turnaround.”

“It’s very sad that you have chosen money over your country,” he concluded.