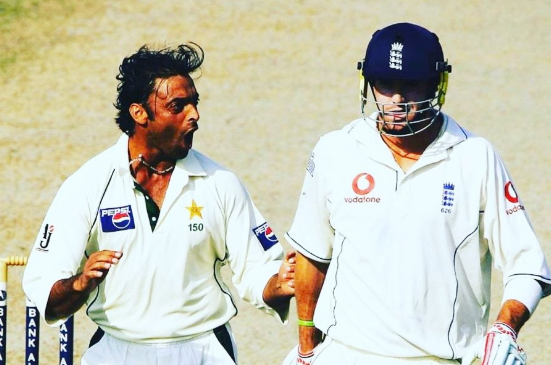 Former Pakistani fast bowler Shoaib Akhtar was always a big thorn for the opposition batsmen in his prime back in his playing days. His sensational pace put the opposition batsmen in fear as they were often beaten for pace. Since retiring, he has taken up a role as a cricket analyst and pundit. While he may not be playing anymore, his love and passion for the Pakistani national cricket team, has not faded even a bit. Quite recently, Akhtar shared a picture on Twitter, in which he was passionately celebrating after taking Kevin Pietersen’s wicket. He advised the Pakistani team to play the game with passion like he used to. However, it did not go quite as planned for The Rawalpindi Express, as he was brutally trolled in return by Peterson. 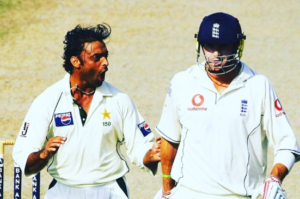 Pakistan lost their opening game of the tournament to West Indies by 7 wickets and failed to even play out the entire quota of 50 overs, managing to make a total of only 105 runs.

Blood, sweat, aggression, racing heartbeat, badmaashi. This is whats required when you represent your country. This star on your chest is your pride guys. Tagra khelo.
Go get them. Larr jao. #Pakistan #PakvsEng #cwc2019 pic.twitter.com/b9JnTmBKOp

Can’t argue with that tweet buddy as you’re celebrating after I smacked you all over for a 100…! Great passion! 😂

Pietersen’s rebuttal to Akhtar’s tweet was about reminding him that before he managed to get Peterson’s wicket, he had already smashed him over the park and made a century.

The former Pakistani pacer took the Englishman’s reply light-heartedly and the duo continued their back-and-forth banter in good spirits.

Below are the following series of tweets between them:

Mate you were a true force to reckon with but loved my chicken dance after getting u out ..🕺🏻

Solskjaer needs players at Manchester United with the right mentality