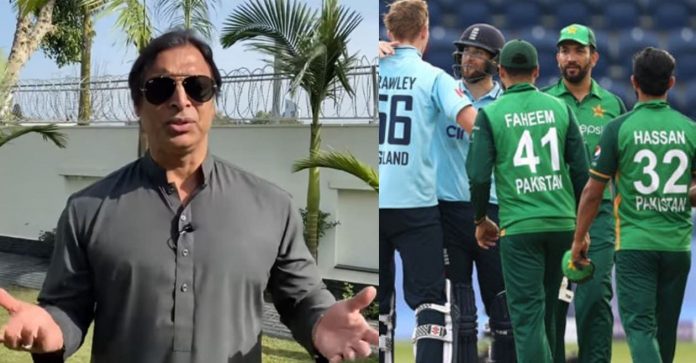 England’s second-string team completely dominated the first eleven of Pakistan in the ODI series. The ‘Unpredictable’ side lived up to its name as they lost the series 3-0. Former Pakistan pacer Shoaib Akhtar was furious with his countrymen’s poor show as he tore apart the Babar Azam-led side. England were struck with bad news when seven members of their squad were covid positive. They had to announce a completely new squad. Their squad had assembled a day before the first ODI. In this chaotic environment, many backed Pakistan to clinch the three-match series without much hassle. But the visitors couldn’t manage to win a single game.

In the first two ODIs, Pakistan’s dismal batting display was the root cause of their defeat. In the last match, their batting performed considerably well and posted 331 on the scoreboard. But their pathetic fielding and inconsistent bowling led to England chasing the target two overs early.

Cricket fans, experts, and media in Pakistan have been constantly criticizing the team management and PCB for this display. Former cricketers like Ramiz Raja, Yasir Arafat, and Danish Kaneria are asking PCB to sack this current management. Most of the stakeholders in Pakistan are unhappy with the results that Misbah and co. are producing for the last 2 years.

The Rawalpindi express who is known for his flamboyance on and off the field gave his opinion on his YouTube channel. He said that if the national team keeps performing like this, Pakistan cricket would be in jeopardy.

“Pakistan cricket is in a very serious situation, in treacherous waters. It’s a very hopeless situation, in the PCB, the management, and the team. I am not saying this because I need a job. I am saying this because I am hurt, because I played this game for my country and I made sure that I run in and people get the value for their money but unfortunately that isn’t happening anymore,” Akhtar said on his YouTube channel.

Shoaib also took a dig at PCB officials. He said that average people in PCB always bring in average management who in turn only select average players. “This needs to be looked into. And somehow people in high authorities are turning a blind eye because they themselves are average people,” he asserted.

England and Pakistan will now face each other in a three-match T20I series. It will be interesting to see if England will recall their old squad or whether they will continue with this one. On the other hand, Pakistan would be eyeing vengeance for the humiliation they faced in the ODI series.