Dhawan was returning to Ranji Trophy as the captain and he had a point to prove to the selectors and team management. He played an innings which helped to team save its face after it lost points in the first two rounds.

Dhawan’s gutsy knock helped Delhi reach 269/7 after the play of first day when the Delhi team had lost its top order cheaply. Delhi were reduced to 49/3 after being hit by the sizzling pace of Mohammed Siraj, who helped Hyderabad put pressure on Delhi. 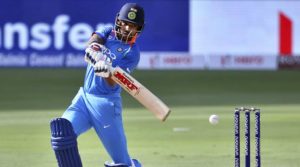 Shikhar Dhawan who has been axed from the One day and the T20 team due to an injury had a point to prove to both team management and selectors.

“I tried to play box cricket, i.e. keep the bat close to the body because good balls could be delivered on this surface any time. These were more like English conditions. Good that I am doing well in these conditions, so my confidence is high,” Dhawan who is known to play orthodox cricket played game with very soft hands and let the ball come to him instead of going for the wide balls and fall prey as the other Delhi batsmen did.

“I had to change my game. When that left-arm bowler (Hassan) was bowling, I felt like I should go after the bowling but I knew we had lost wickets at the other end. When I saw the overall situation, I felt like I had to stay at one end. I felt like if I leave this end, we’ll fold up quickly. We needed to cash in from the position we had got back into (after the poor start) and we did” The Indian opener was satisfied with his performance and was proud of the way he helped Delhi come out of trouble in a situation which could have caused trouble for both the team and players.

Delhi would love to reach the 300 mark and then would require Ishant Sharma to wrap up the Hyderabad innings in order to make a good deal out of the game and get full points of the game.