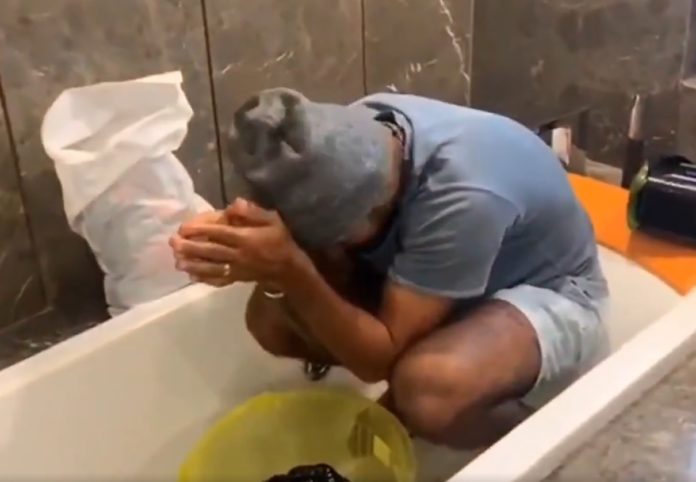 As the world comes to a near-halt to fight the coronavirus outbreak, athletes round the globe are trying out various activities to keep themselves busy. A number of cricketers are sharing videos of their daily routine to show their fans what they are up to and on Tuesday, Indian opener Shikhar Dhawan who is widely known for his humour, posted a hilarious video on his social media account where he can be seen washing clothes under the watchful eyes of his wife!

On Tuesday, the 34-year-old Dhawan, shared a video on Twitter – where the southpaw was seen doing household chores while his wife Ayesha Dhawan did her make-up. To make the situation even more hilarious, Mrs Dhawan was then spotted giving directions to her husband, who pleaded her to relieve him of his household duties.

The video drew reactions from fans all-round the globe; with David Warner, Dhawan’s former teammate from Sunrisers Hyderabad, responded with laughing emojis while writing “I hear you @SDhawan25” in the retweet.

Earlier this month, almost all cricket-playing countries called off their international and domestic fixtures in the light of the Covid-19 outbreak.

The 2020 edition of the Indian Premier League was suspended until April 15, but the announcement of a nationwide 21-day lockdown by Prime Minister Narendra Modi, the cancellation of the tournament looks inevitable. The BCCI has also postponed all domestic cricket tournaments for an indefinite period.

The Pakistan Cricket Board cancelled the Pakistan Super League just before the knockout stages, while Australia, Bangladesh, New Zealand, South Africa and West Indies, also had to adjust their fixtures amid the Covid-19 scares. Reportedly, the World Test Championship final which was scheduled to be hosted in England next year could also be rescheduled or even cancelled.

Meanwhile, on Tuesday, the International Olympic Committee stated that the 2020 Tokyo Olympics has been postponed after Canada and a few other countries decided to pull out of the Games which was supposed to commence from July 24.

Read why Dale Steyn wants to be in quarantine with teammate Quinton de Kock!