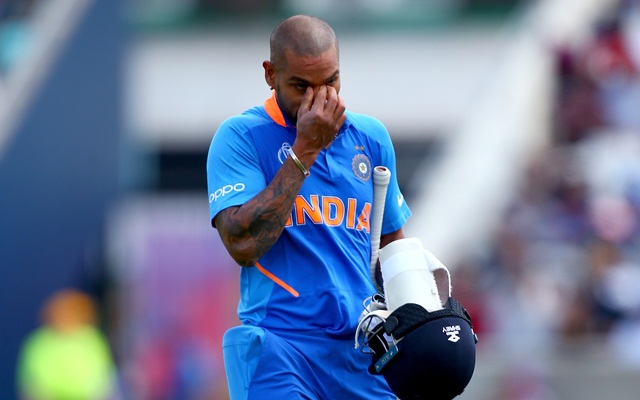 Shikhar Dhawan’s injured thumb from the game against Australia has ruled him out of the World Cup. The BCCI announced this and the inclusion of Rishabh Pant as a replacement on Wednesday.

The team management had decided on waiting for the thumb to heal before naming a replacement. But looking at the progress of the injury, the thumb could be healed completely only around mid-July. By this time, the tournament would have ended. Hence, the team named Rishabh Pant as the official replacement for Shikhar Dhawan.

Dhawan took to his twitter post the announcement and posted an emotional video. In this video, he thanked his fans for the constant support and prayers.

“I feel emotional to announce that I will no longer be a part of #CWC19. Unfortunately, the thumb won’t recover on time. But the show must go on.. I’m grateful for all the love & support from my teammates, cricket lovers & our entire nation. Jai Hind!” is what he wrote on his twitter handle.

I feel emotional to announce that I will no longer be a part of #CWC19. Unfortunately, the thumb won’t recover on time. But the show must go on.. I'm grateful for all the love & support from my team mates, cricket lovers & our entire nation. Jai Hind!🙏 🇮🇳 pic.twitter.com/zx8Ihm3051

Australia’s Pat Cummins bowled a ball that hit Dhawan straight on the thumb. But the opener continued batting and scored a century. He was also the Man of the Match in that game. However, he did not come out to the field in that game.

Rishabh Pant, who was a part of the back-up group of players, was flown into England to as a precautionary replacement. The team did not want to rule out Dhawan immediately, as there were chances of him recovering early. However, with that possibility ruled out, Rishabh Pant will be a part of the team from the Afghanistan game.

“Shikhar has a fracture at the base of his first metacarpal on his left hand,” announced the team manager on Wednesday.

“Following several specialist opinions, he will remain in a cast until mid-July, which rules him out of the ICC World Cup 2019,” manager Subramanium added.

An official request has been made to replace Shikhar with @RishabPant777 in the World Cup squad #TeamIndia #CWC19 pic.twitter.com/WqXptyspSm