India’s spin maestro Harbhajan Singh has always been one of India’s finest spinners who has helped his side win many matches – be it for India or any other team in his stint in the cash-rich Indian Premier League throughout the years.

In his stunning cricketing career, the off-spinner has played 4 World Cups for India, including the title win in the 2007 & 2011 editions as well. While someone has a career of more than two decades, the first international wicket remains special for anyone and Harbhajan Singh is no different.

However, he recently shared a video on Instagram featuring his first international wicket. It was during his debut match against Australia at Bengaluru in 1998 when he sent Greg Blewett in the dugout with a delivery that hit Blewett’s off stump. While this was a treat to his fans, he shared it with a famous rap which took the limelight.

However, as soon as Harbhajan Singh posted the video, fans started commenting. Not only fans but Indian players too have commented.

Here’s a look at a few reactions: 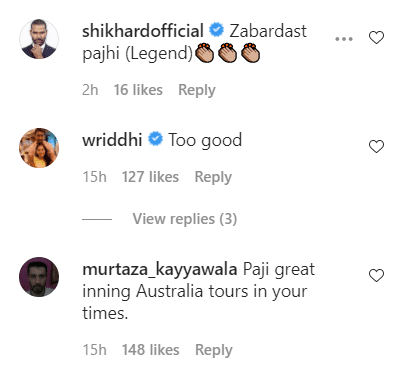 Harbhajan Singh made his debut in Tests in 1998 and took 417 scalps in 103 matches at an average of 32.46, including 25 five-wicket hauls and five 10-wicket hauls as well. His ODI debut was against New Zealand in the same year. In 236 ODIs, he claimed 269 wickets which came at an economy rate of 4.31 as well. Meanwhile, this also included three 5-wicket hauls too. In the shorter format, he represented India in 28 matches and picked up 25 wickets at an economy rate of 6.21, following his debut in 2006.

However, he has tasted a fair share of success in the IPL also. He made his debut against Bangalore while playing for Mumbai Indians in the inaugural edition. He has played 160 matches so far and claimed 150 wickets. He was a key player of Mumbai for 10 years until 2018 as in that year Chennai bought him at a base price of ₹ 2 crores. And, he did fairly well for his new franchise as well before pulling out his name from the cash-rich league this season. Notably, this year IPL took place in the UAE that too behind the close doors.