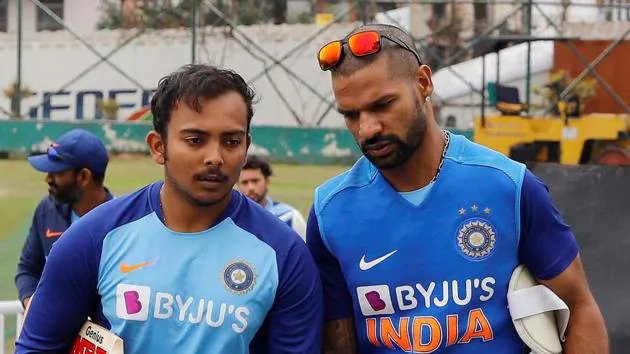 The immense squad depth of Team India has ensured that a selection headache is inevitable. With five openers in the squad at present, only two can make the cut into the playing eleven.

While skipper Shikhar Dhawan is certain to open, the question ponders upon his potential batting partner. The options arise in the form of Prithvi Shaw, Devdutt Padikkal, Ruturaj Gaikwad, and even Nitish Rana.

The team management have apparently made their call in terms of Dhawan’s opening partner. Sources claim that Prithvi Shaw will open the innings alongside the skipper in Colombo for the first ODI.

Shaw’s experience with the national team and the fact that he has had a stellar year so far, helped the case. The young batsman played and led the Mumbai side to victory in the Vijay Hazare trophy, scoring over 800 runs in the process which includes a double hundred.

Moreover, he was also in full-flow in the 14th edition of the IPL and forged impeccable chemistry with Dhawan. The left-right combination punished bowlers mercilessly as Delhi Capitals led the table during the league’s suspension.

“Shaw scored pile of runs in the restricted domestic season. Dhawan & Shaw have great understanding as opening partners as they come from the same IPL team. I will be surprised, if anyone else will be played as India’s opening pain in the 1st ODI on 13th July, I think both Ruturaj and Padikkal will have to wait for their chances,” said the team source from Colombo.

Shaw was part of the Indian team that toured New Zealand in 2019. He proceeded to make his debut in the first ODI in Hamilton. The 21-year-old played in all of the matches in the series, with a top score of 40, as the nation slumped to a 3-0 whitewash.

He is also the leading candidate to open in the T20 series as well. The team are keeping tabs on Shaw very closely and eye him as a potential backup opener for the T20 World CUp later this year.

There was an apparent tug-of-war between the camp in England and the BCCI to determine Shaw’s fate. The team in England wanted Shaw as Shubman Gill’s injury replacement, but the BCCI suggested the use of Abhimanyu Eeswaran while keeping Shaw for the limited-overs series.

SL vs IND: Captain Shikhar Dhawan outlines his idea of leadership ahead of first ODI