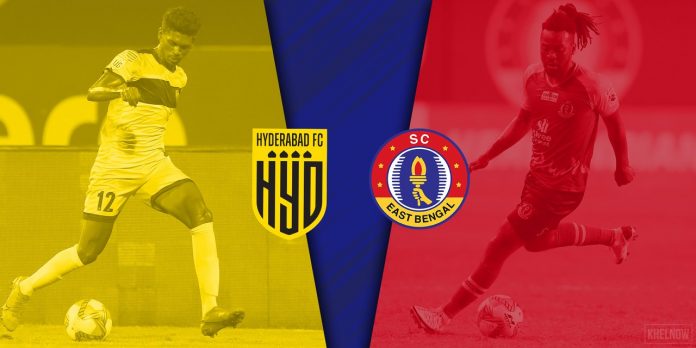 Yet again SC East Bengal threw away a lead in the dying moments, leading to a late comeback by Hyderabad and thus a perfect win turned into a 1-1 paltry draw.

A clash which for large parts was an extremely monotonous affair turned into a rollercoaster ride in the dying moments with a  late goal, a brawl, and a red card all in a span of just 5 minutes. It was Aridane Santana who punished the sloppy East Bengal defence with a simple tap-in from close in the stoppage time.

The result also means that both Mumbai City FC and Mohan Bagun now have secured their playoff berths with 4 rounds of games still left.

The late drama and the East Bengal bad luck-

The Nizams enjoyed better possession early on, but SCEB had more shots on target. The Kolkata-based side created more opportunities compared to Hyderabad in the first half.

After minimal chances for both teams in the first half, the game came alive in the second 45 minutes. Bright gave SCEB a deserved lead in the 59th minute with a lovely ball in from Pilkington.

For a long time, it looked like SCEB would take home the three points, but a stoppage-time equalizer from Aridane helped HFC draw level.

The drama, though, was not over there as moments later, Mohammed Yasir saw red for a dangerous challenge on Wahengbam Luwang that meant HFC ended the game with 10 men.

Earlier East Bengal was unlucky not to be awarded a penalty late in the game when Hyderabad goalkeeper Laxmikant Kattimani brought down Bright.

Akash Mishra was deservedly awarded the Man of the Match for his gritty performance.

The result extended the Nizams’ unbeaten run to nine games.

Goa FC will face off against Chennaiyin today and would be hoping to bolster their playoff hopes. On the other hand, Chennaiyin is in a must-win situation if they are to have any hope of remaining in the playoff race.