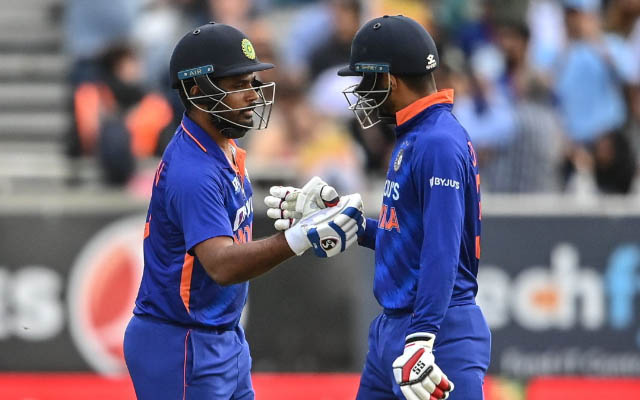 Deepak Hooda scripted history in the second fixture against Ireland on June 28 (Tuesday), by becoming only the fourth Indian batter to score a T20I century  In the process to reach the elusive three-figure mark, the all-rounder shared a record 176-run partnership with Sanju Samson for the second wicket.

After opening the batting in the first T20I, Deepak Hooda came into bat at No.3 following the early dismissal of Ishan Kishan. The all-rounder registered his maiden fifty while Samson did the same from the other end.

The duo put on the highest partnership for India in the shortest format. While Samson perished for a well-made 77, Hooda stood tall and converted his knock into a landmark three-figure.

“Sanju is a childhood friend, we played U-19 together, I am happy for him as well. Ireland is very good, I enjoyed it a lot. Fans are superb here, I never feel like playing outside India. Yeah, the wicket is different, thanks to all the fans for the support.”

Hooda’s batting credentials came to the fore after an eye-opening Indian Premier League (IPL) 2022 campaign with the Lucknow Super Giants (LSG). The all-rounder scored 451 runs in 15 matches at an average of 32.21.

Relishing the opportunity to play up the order, Hooda said:

“I am coming from a good IPL, I was trying to follow up the same performance here as well. I like playing aggressively. Batting up the order, I have the time, I try to play according to the situation.”

The all-rounder is among the pool of players who are being considered for the T20 World Cup in Australia later this year.

India secured a 2-0 series win over Ireland following a nervy finish in the second match. The hosts fell short by just four runs in what would have been a record chase.

Earlier, Hooda’s record century helped the Men In Blue post 225-7 on the board, which is the second-highest score at the venue. He could still feature in the tour of England as India are scheduled to play three ODIs and three T20Is next month.