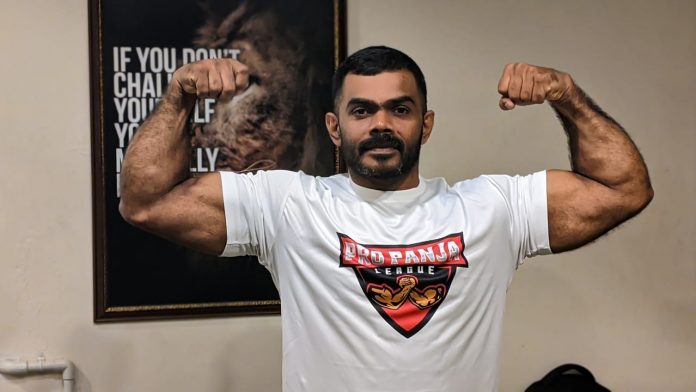 Sameer VT started arm-wrestling nearly 23 years ago and he is currently the 13-time Indian ArmWrestling Federation National champion. He is also an Asian Silver Medalist and he was also the 2019 captain of the Indian team. He has also won three national championships in Qatar.

Ahead of Pro Panja League’s ranking tournament, We had the opportunity to chat with Sameer VT to get his thoughts on the upcoming event.

How is your training going ahead of the Pro Panja League’s ranking tournament?

I have started training now and have been spending a lot of time in the gym ahead of the ranking tournament.

Have you made any changes in your training regimen?

Yeah, I have made a significant change in my training regimen. Earlier I used to put a lot of focus on Arm Wrestling specific workouts, but now I have been doing a lot of upper body exercises, and strength and power training. I will also be making my 100 kg debut in this ranking tournament.

What is the reason behind you competing in the 100kg category?

I used to compete in the super heavyweight category earlier. But during the covid-induced lockdown, I was able to bring my weight down to the 90s, so I feel that the 100kg category is ideal for me. I am currently 95kg and will go up to 98kgs for the tournament.

What type of diet regimen are you following for the Pro Panja League’s ranking tournament?

I am following a protien-heavy diet. I am eating a lot of fish, chicken and a lot of green vegetables.

How has your experience been with the Pro Panja League?

My experience has been very good with the Pro Panja League and I think it will be the biggest tournament in the world and more people will participate in it than in the world championship.

How confident are you heading into this tournament?

I am very confident that I will win a Gold medal at the Pro Panja ranking tournament.