Liverpool are oh so close to the title and they’d probably do whatever it takes to not slip up again. However, it just seems that Liverpool are slipping and even being unlawful while at it in the form of their talisman Mo Salah diving and simulating week in week out. 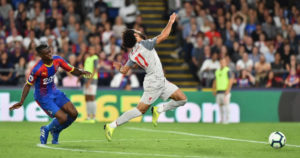 This weekend, the Egyptian was criticised for his theatrics and went to ground easily again in the win over Crystal Palace after a challenge from Mamadou Sakho.

Pundit Chris Sutton has a word of warning for the man in the spotlight who’s garnering a reputation for the wrong reasons now.

“Every time he dives, he risks costing Liverpool the Premier League title. His tumble against Palace was the second time in the last month that Salah has gone down easily,” Sutton writes in the Mail.

“If he keeps diving, he risks being hit with a two-game FA ban. Liverpool only need to slip up twice to put Manchester City back in the title driving seat.

“It would be a travesty if it is simulation, not his goalscoring, which ends up settling the most thrilling title race for years.”

Well, who remembers Steven Gerrard slipping off the summit? Certainly , the red side of Merseyside would not want history to repeat itself. As for Mo Salah, venturing into the fine line between ‘being too clever’ and ‘turning into an anti-narrative’ wouldn’t be too wise.

Gary Neville has some interesting advice for Liverpool

Gareth Bale may return to Premier League as a loanee

Girlfriend told Luke Shaw that Ole got the job as Man...