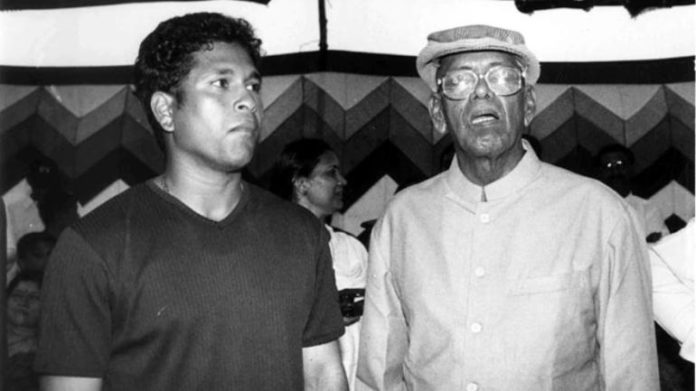 On this day last year, Ramakant Achrekar, the childhood coach of master blaster Sachin Tendulkar, passed away and on his first death anniversary, Tendulkar paid a heartfelt tribute to his mentor through social media. The Dronacharya award winning coach, also trained several other fine players like Vinod Kambli and Pravin Amre at Shivaji Park in Dadar, Mumbai during the 80s and 90s.

“You will continue to remain in our hearts, Achrekar Sir!” Sachin tweeted in English and Marathi along with an old photograph of him with his teacher.

You will continue to remain in our hearts, Achrekar Sir! pic.twitter.com/IFN0Z6EtAz

The legendary batsman was in touch with his coach throughout his illustrious career, till Achrekar’s demise on January 2, 2019 due to age-related complications. Shortly after his funeral, Sachin posted an emotional message for his former mentor.

“Cricket in heaven will be enriched with the presence of Achrekar sir,” wrote Tendulkar.

“Like many of his students, I learnt my ABCD of cricket under Sir’s guidance. His contribution to my life cannot be captured in words. He built the foundation that I stand on,”

“Achrekar sir taught us the virtues of playing straight and living straight. Thank you for making us a part of your life and enriching us with your coaching manual. Well played Sir and may you coach more wherever you are.”

No Mentor can ever be as incredible as you are because you did not only teach me to play cricket 🏏 in the best way possible but you also taught me real life lessons.
I miss you a lot, Achrekar Sir! pic.twitter.com/UVXKhZZEUo

“No Mentor can ever be as incredible as you are because you did not only teach me to play cricket in the best way possible but you also taught me real life lessons. I miss you a lot, Achrekar Sir!”, Kambli tweeted.

During his tenure as a player, Achrekar himself competed in just a single first-class match but would go on to play a crucial role in moulding Tendulkar in his early days. However, the last few years before his demise would prove to be the most painful days of his life as he suffered a stroke 6 years prior to his death, which reduced his mobility in to a bare minimum.

The legendary coach was honoured with the Dronacharya Award in 1990 and the Padma Shri in 2010.


Sachin Tendulkar to all men: Don’t hide your tears!

Sachin Tendulkar : Split ODIs into 4 innings of 25 overs each!