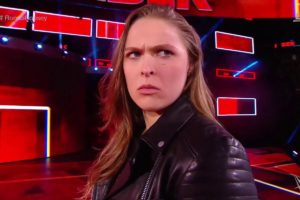 RAW Women’s Champion Ronda Rousey is out on her mission for revenge. The Rowdy One was stabbed in the back by the Bella Twins this week on RAW following their victory against The Riott Squad in six-women tag team competition.

Brie and Nikki Bella cut short their post-match celebrations and ruthlessly attacked Rousey, to the shock of both the Champ and the WWE Universe. The 31 year old did fight back but the numbers game proved to be too strong as she was left motionless in the middle of the ring.

The Bella Twins responded to their actions in an exclusive interview:

Later during the night, it was announced that Nikki would get a shot at the RAW Women’s Championship later this month at WWE Evolution on October 28.

Formerly, good friends, Rousey has now found two new enemies. In her latest interview, Ronda reacted to the betrayal by the Bellas this past Monday and said, “Nikki Bella, Brie Bella…they’re a bunch of untrustworthy bitches.”

Here’s the clip of Ronda Rousey’s appearance on TMZ Sports: