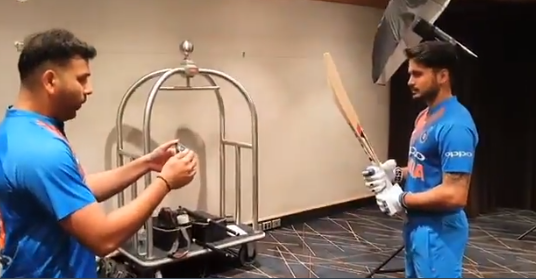 India’s limited overs vice-captain Rohit Sharma picked a camera instead of the bat as he showcased his cinematography skills and shot an intro video for his teammate Manish Pandey. 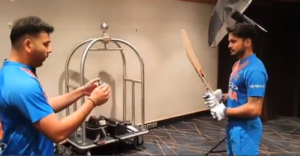 The video was shared by the official Twitter account of BCCI. Cool and carefree as ever, Rohit can be seen directing the video in his own way which turns out to be a good shoot as even Pandey was impressed.

Rohit took two takes and in both the videos, Manish acted in a different way. However, the camerawork was the same and it was laudable.

“MUST WATCH – When Hitman became Cameraman ???????? We get behind the scenes as @ImRo45 goes behind the lens to profile @im_manishpandey during a photoshoot – by @28anand,” BCCI tweeted in the video they posted.

MUST WATCH – When Hitman became Cameraman 👀👀

Despite him being such calm and composed behind the camera, he could muster only 4 runs for his team in the first T20 eventually leading to the team’s downfall. India fell short of the revised target in the end by a margin of 4 runs.

They’ll look to regroup themselves and get back to winning ways when they take on Australia in the 2nd T20 on Friday at Melbourne.

India Women bow out of the Semi-finals in World T20I, lose to England by eight wickets