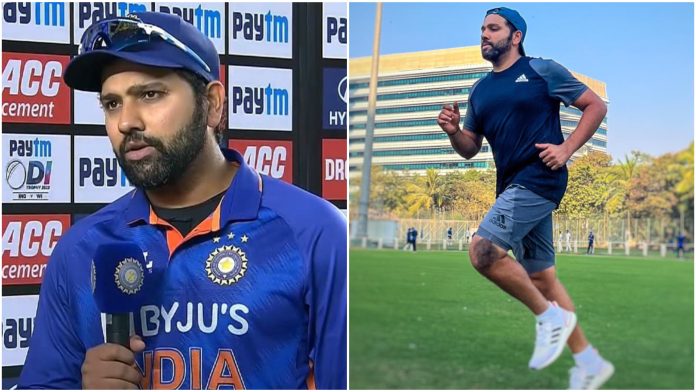 Team India skipper Rohit Sharma has made his return to training ahead of the white-ball series against Sri Lanka, which gets underway on January 3, next year. The stellar batsman had sustained a finger injury while fielding during the second ODI against Bangladesh in Dhaka. He was eventually ruled out of the third ODI and the following two Tests against the Bangla Tigers. Although India lost the ODIs by a 2-1 margin, they inflicted a whitewash in the two-match Test series, winning it 2-0.

Rohit had immediately returned to Mumbai to nurse his injury and consulted with doctors with a few important series lined up. He recently returned to training and shared a couple of pictures on his official Instagram account. Rohit was spotted jogging in one of the pictures, while in the other, he was seen going through fielding drills.

Rohit had injured his left hand while attempting to take a catch in the second ODI against Bangladesh at the Sher-e-Bangla Stadium in Mirpur. Vice-captain KL Rahul had then taken over the captaincy duties.

He is likely to return to action in the series against Sri Lanka if he recovers fully. The Men in Blue will play three T20Is and as many ODIs against the Lankans, starting on January 3.