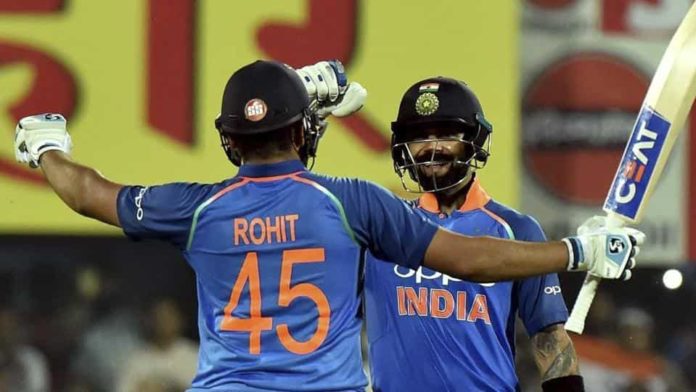 India vs West Indies 1st ODI: Team India opener Rohit Sharma has added record to his name by breaking little master Sachin Tendulkar and David Warner’s joint record to become the first batsman with six 150-plus scores in One-Day Internationals (ODIs). Rohit scored his 20th ODI hundred and became the fourth Indian to do so in ODI cricket. He stayed unbeaten on 152 off 117 balls to help India register an emphatic win on Sunday.

The Mumbaikar also completed 4000 runs in India, in international cricket – in just 87 innings – making him the second fastest batsmen to do so, just behind Indian batting legend Sunil Gavaskar who achieved the same in 86 innings.

Virat Kohlii didn’t fall behind as he brought up his 36th ODI hundred and his fourth in ODIs in 2018. With the century, he reached the milestone of 60 international hundreds (36 in ODIs and 24 in Tests) and became the fastest to do so. Kohli is also just 81 runs away from completing 10000 runs in ODIs.

The duo of Virat Kohli and Rohit Sharma put on 246-run stand against West Indies while chasing. Their stand at the Barsapara Cricket Stadium in Guwahati is the highest for India while chasing a total and second highest overall in ODI cricket. The first is between Shane Watson and Ricky Ponting (252 runs) versus England in 2009 in Centurion.

West Indies will be looking to bounce back after their loss in the first ODI. The next ODI is to be played in Vizag on Wednesday.