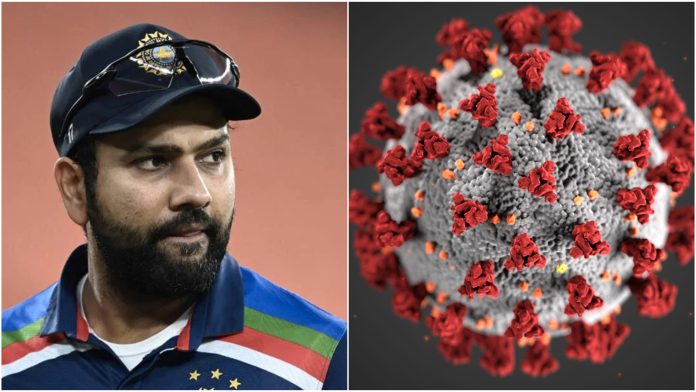 The Indian captain Rohit Sharma recently has tested positive for COVID-19 ahead of the decider Test match against England. The Board of Control for Cricket in India (BCCI) confirmed the issue through an official release. Rohit Sharma was part of the team that is taking on Leicestershire in a 4-day tour game at Uptonsteel County Ground in Leicester ahead of the decisive Test match against England.

Rohit Sharma is currently in isolation

BCCI revealed the matter on its official Twitter handle. “#TeamIndia Captain Mr Rohit Sharma has tested positive for COVID-19 following a Rapid Antigen Test (RAT) conducted on Saturday. He is currently in isolation at the team hotel and is under the care of the BCCI Medical Team,” BCCI wrote on Twitter.

UPDATE – #TeamIndia Captain Mr Rohit Sharma has tested positive for COVID-19 following a Rapid Antigen Test (RAT) conducted on Saturday. He is currently in isolation at the team hotel and is under the care of the BCCI Medical Team.

The Rohit Sharma-led side arrived in England last week and have been preparing for the marquee clash. Recently, a video clip on social media showed the players sweating it out in the nets ahead of the huge match. Rohit Sharma recently penned down a heartfelt note after completing 15 years in international cricket.

There will be some notable members missing from the one-off Test. Indian batting ace KL Rahul who is out with an injury, and potentially Ravichandran Ashwin, who recently contracted COVID-19. The fifth Test of the series against England, which India lead 2-1, at Old Trafford could not be played due to an outbreak of COVID-19 cases within the visitors’ camp.

ALSO READ: WATCH: Virat Kohli hits the nets ahead of the warm-up game against Leicestershire