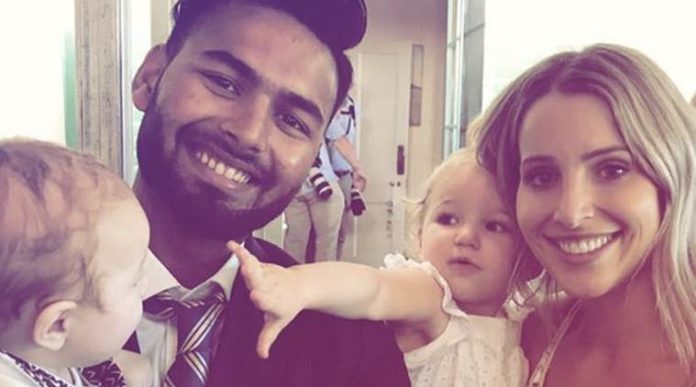 Wicket-keeper batsman Rishabh Pant became the talk of the town in Australia, both for his performance on the pitch and the sportsmanship off it. The banter between him and Aussie skipper Tim Paine made headlines as both took their turn behind the stump to unsettle the other. After Pant’s great gesture of meeting Paine’s wife and kids during the team’s visit to the Australian skipper’s house, India’s limited overs vice-captain Rohit Sharma has asked as the ‘best babysitter’ if he could babysit his newborn daughter Samaira too.

Rohit, who has returned to Australia after leaving for home ahead of the Sydney Test, doesn’t have Pant in the company as the wicket-keeper batsman isn’t a part of India’s ODI squad for the series. As Hitman prepares for a new adventure Down Under, the batsman had to leave his wife Ritika and newborn daughter are back home for national duty.

On Wednesday, Pant shared a picture of him on Twitter with caption, ‘Good morning’. Rohit reacted to the same post saying, ‘Morning buddy. Heard your a good baby sitter, need one right now. Ritika will be quite happy @RishabPant777′.

Morning buddy. Heard your a good baby sitter, need one right now. Ritika will be quite happy 😃 @RishabPant777 https://t.co/JkGWTYpnBk

Rohit had become a father on December 30th but he couldn’t be with his wife due to the ongoing Test series Down Under. The 31-year-old flew down to India as the visitors took a 2-1 lead in the 4-match series by winning the Melbourne Test. He is now back in Australia to participate in the 3-match ODI series.

Rishabh, meanwhile, broke several records as he produced a stunning 159-run knock in the 4th and final Test in Sydney. In what was an extremely productive outing for the young wicket-keeper, he certainly enjoyed himself with some fun-filled sledging from behind the stumps too. His performance on the pitch also earned him recognition from the ICC as Pant went past MS Dhoni as the Indian wicket-keeper batsman with highest rating points in ICC Test Rankings for batsmen.

The Delhi-born cricketer will next be seen in the Indian national team jersey against New Zealand, as the Men in Blue take on the Kiwis in a 3-match T20I series next month.

A Study In Pink: What the Day/Night pink ball test at...